Lochwinnoch’s Emma McDonald won gold in the women’s eight at the 2018 FISU World University Rowing Championships in Shanghai whilst a further two athletes from Edinburgh University also made the top of the podium.
Since graduating a year ago from the University of Glasgow, the club she represented at these Championships, McDonald has combined being a primary teacher in Surrey whilst rowing at Molesey Boat Club. 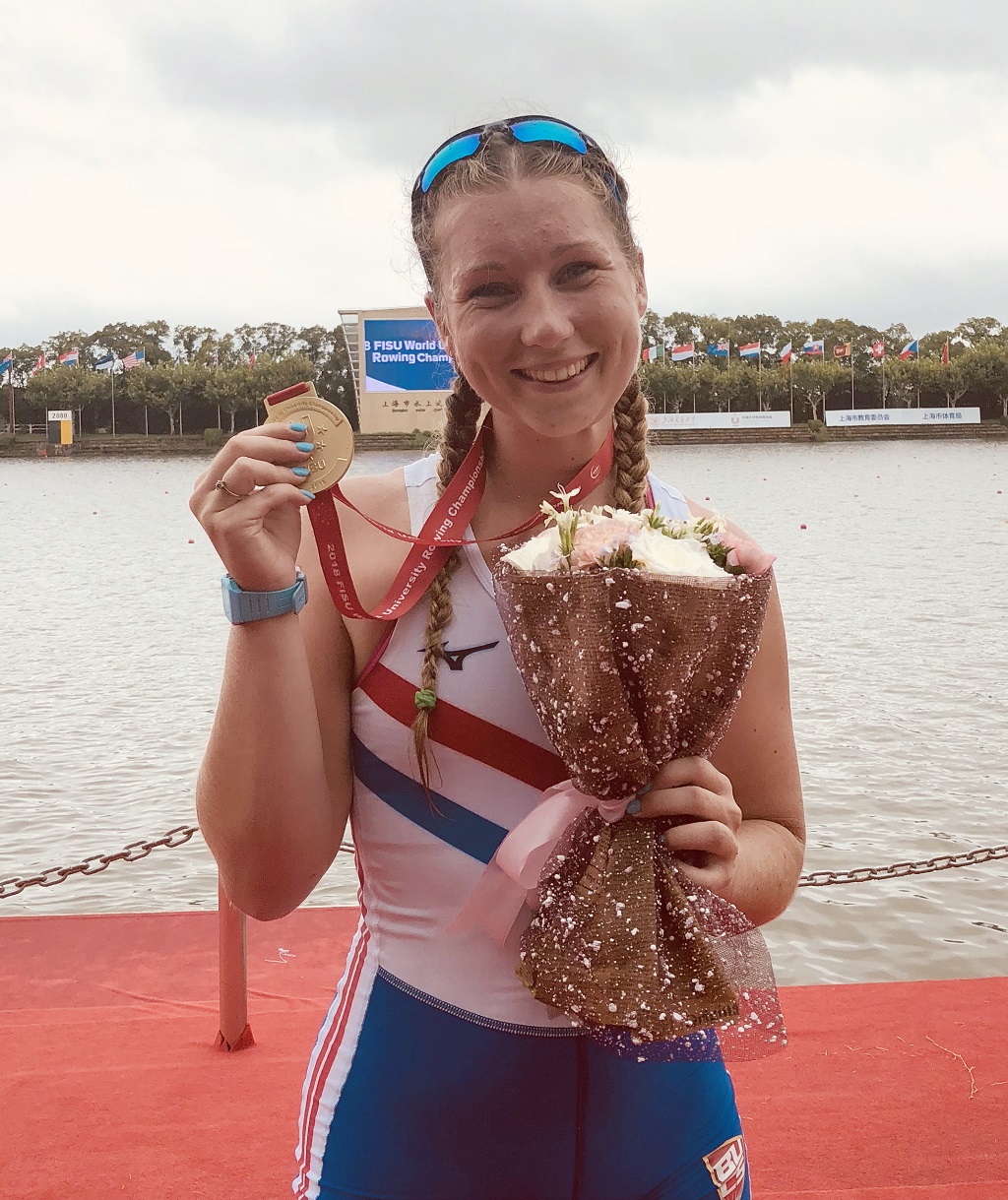 Despite, or possibly because of, her heavy 11 hour-a-day work schedule (managing to keep healthy at school by applying lots of hand gel) her rowing has improved.
“I do find it incredible that I have actually improved as a rower and I really didn’t think I would be able to do it,” said McDonald, who had the bow seat in the successful women’s eight.
“I have found it really hard to balance the two of them and it just takes so much discipline combining rowing with teaching.  I think you worry about it a lot when you’ve got time to worry about it (as a full time rower).
“But when you get off the water at 7.30 AM and then have to go to work you don’t have time to worry about anything other than the next thing you’ve got to do.”
Amongst the life changes Emma has made is a move out of lightweight boats.
Realising her adopting club Molesey had large numbers of girls competing in the openweight category, it was almost inevitable that if she wanted to get in a top crew she would need to move up.
And having made the change it quickly became apparent she was better suited to the new category.
It was at April’s GB Selection trials that McDonald qualified her place for the World University Rowing Championships but it was not until much later that her eight (which included Edinburgh University’s Lydia Currie) joined forces. 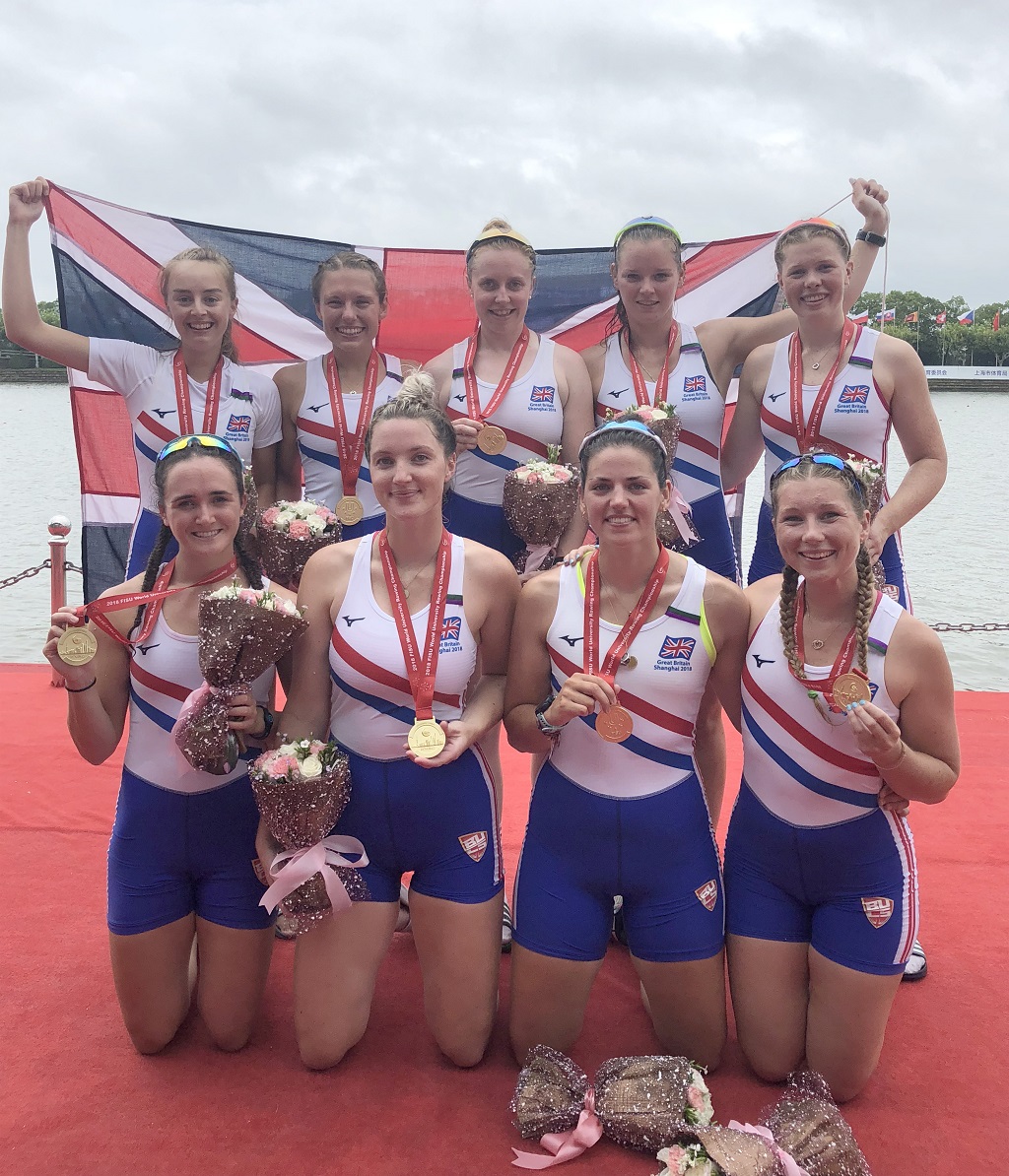 “We got together the day after Henley Royal Regatta because all the girls in the boat had their separate club projects going into Henley,” she said.
“It was so nice to all come together because we have spent the entire year competing against each other.
“It was all the best in the country who have been fighting it out all year.  We had three weeks of solid training, two to three sessions a day, really working for it.
“We hoped to do well because in training we knew our times were decent and we knew with the pedigree in our boat we should have a good chance.
“In the final we finished about three quarters of a length ahead of the Canadians with the Americans in third.”
The Great Britain team, which created history in Shanghai securing six gold and one silver medal, was led by Lee Boucher, Scottish Rowing’s Head of Performance Pathway.
Edinburgh University’s Oli Wilkes won gold in the men’s four and Matt Curtis was sixth in the lightweight men’s double scull.
Whilst winning was the high point for her boat McDonald there was also a strong bond within the team.
“It was so lovely and the team really bonded when we were out in Shanghai,” she added.
“There were so many obstacles, and even to get ourselves to the start line there was incredible humidity and heat to deal with.
“The coaches were amazing and worked really well as team and everyone gave each other so much support on how to stay cool and all the things you need to do in such a difficult environment.”
For full results visit:  http://wuc-rowing2018.sjtu.edu.cn/en/results/