It is with great sadness that we share the news of our dear friend and fellow rower Bob Reid who passed away in hospital earlier this week. Our thoughts are with Shona and their family at this very sad time.

Bob’s rowing career started whilst at school at the Aberdeen Academy in the late 1960’s and following his move south to Glasgow to attend RSAMD he rowed with Clyde ARC before moving up river to join GUBC and the Glasgow Argonauts BC. 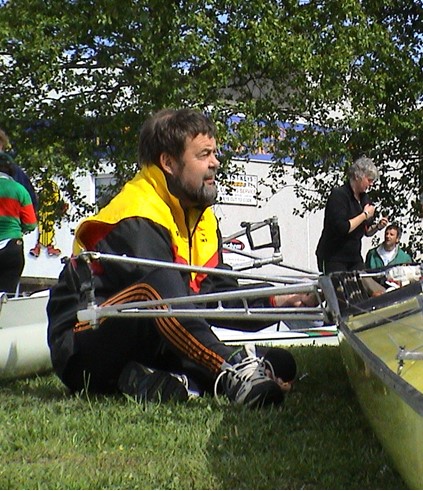 1975 was a particular highlight of Bob’s rowing career when he competed for Club and Country for the Silver Goblets Challenge Cup at Henley, the winning crew in coxless 4 at the Scottish Championships and for Scotland at the Home International Regatta.

Bob was also one of the founding members of Glasgow Rowing Club, created when Glasgow Argonauts BC joined with the City of Glasgow RC in 1983.

Following his competition success, he went on to manage the Scotland Team at HIR, serve on the SARA Executive and was the Lead Commentator for the 1986 Commonwealth Games where he met HRH Princess Anne. In 2002 he began his 15 year career as an Umpire whilst continuing to support GRC as President and active member. Many younger GRC members will remember Bob as the driving force behind blade painting and boat maintenance. He was committed to the the annual blade painting effort, to the fixing of boats and assisting others with their repair attempts and upkeep. His gentle wisdom and wit will be especially missed by all at GRC as well as the wider Scottish Rowing community.