The Scotland Rowing Team made history on home waters at the 2019 Home International Regatta (HIR) on Saturday, winning three of the four team trophies for the first time in the history of this prestigious annual competition between Scotland, England, Ireland and Wales. 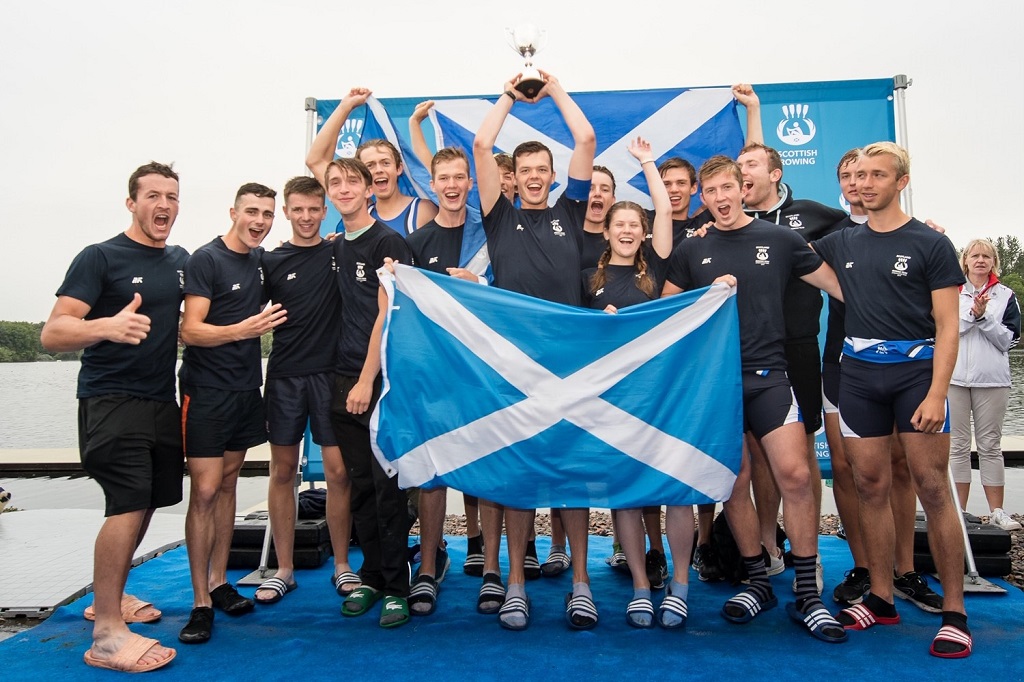 Scotland won 16 of the 36 races on the day in wet, but calm, conditions at the world class rowing facility at Strathclyde Park, North Lanarkshire.
Leading the way was Edinburgh University Boat Club’s James Temple who won all three of his races – the lightweight men’s single and double scull and the men’s quad – to help the Scottish senior men regain the Annamarie Phelps MBE Cup, last won by Scotland in 2015. 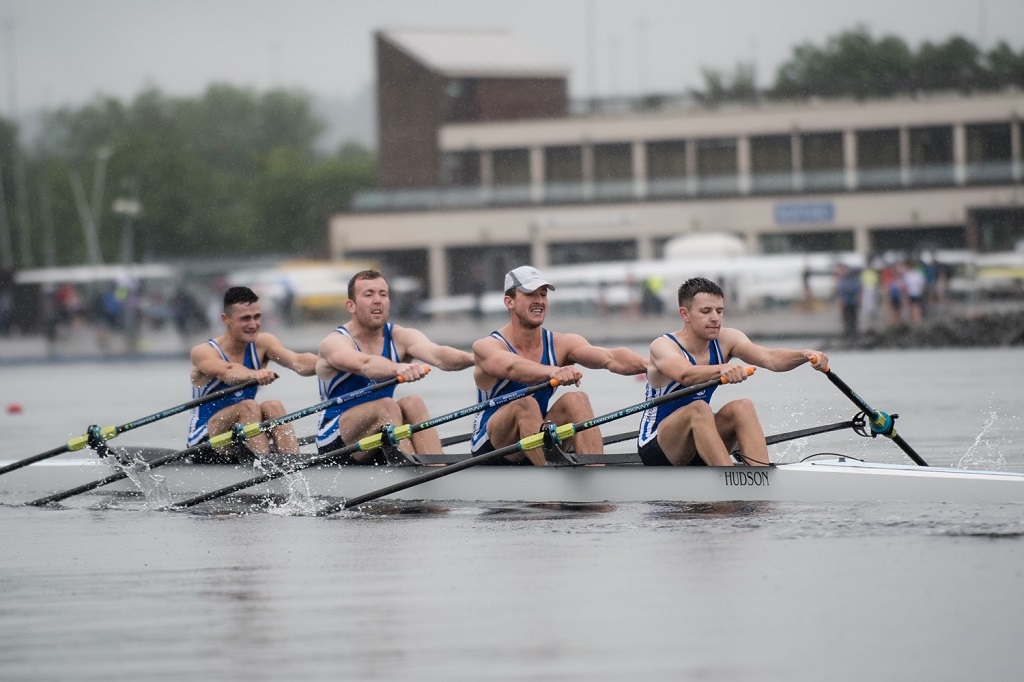 The Scottish men’s coxless four of Josh Thompson, Rory Young, Calum Young and Robert Powell were involved in one of the most exciting races of the day coming through the field from third place at 1000 metres to pip England on the line to the gold medal.
Jack Burns retained his men’s single sculls title, part of an impressive men’s sculling group alongside Temple, Dale Flockhart and Mike Simpson, that won four of their five events.
Glasgow University students Ethan Matthews and Duarte Menezes produced a dominant display to lead their race from start to finish, winning the lightweight men’s pair by over 8 seconds.
Scotland’s senior women have won the Dame Katherine Grainger Quaich in two of the last three years however they were out to regain the team trophy from England who won it in Cork last year.  The Scots, seemingly inspired by the occasion, were in unstoppable form winning seven of the nine boat classes including the women’s eight in the penultimate race of the day. 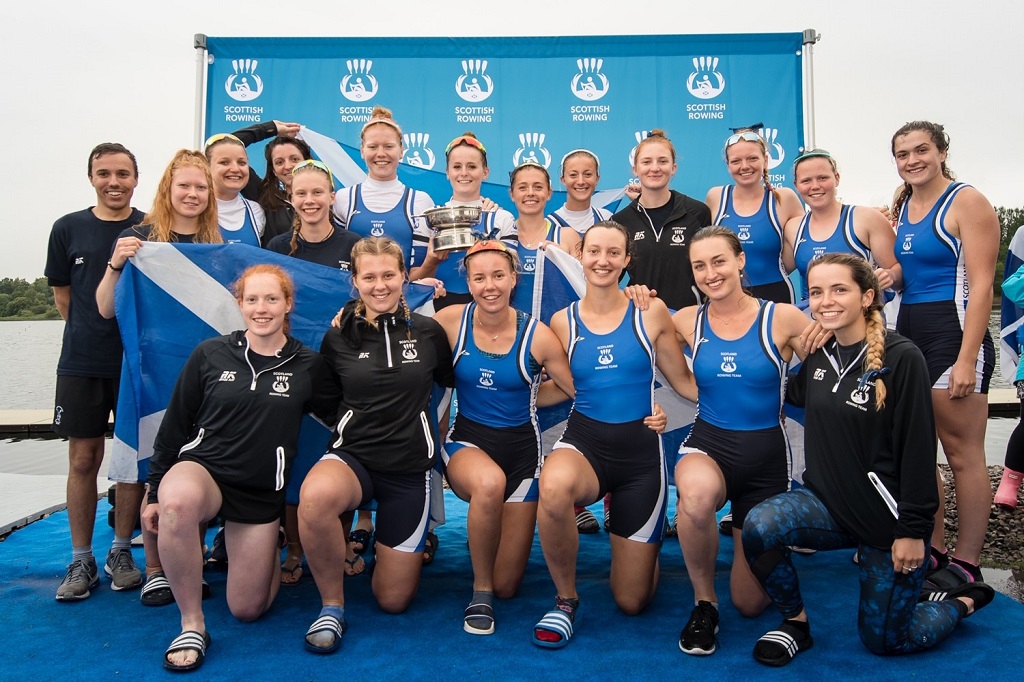 It was a Scotland Rowing Team debut to remember for 18-year-old Maia Hely of Glasgow University, enjoying two wins in the senior women’s coxless four and eight despite having only taken up the sport as a beginner 11 months ago.  Her four, with clubmate Niamh McClure and Kirstin Giddy and Lydia Theos from the University of St Andrews, enjoyed an excellent victory over a Welsh crew featuring GB senior and under 23 internationals. 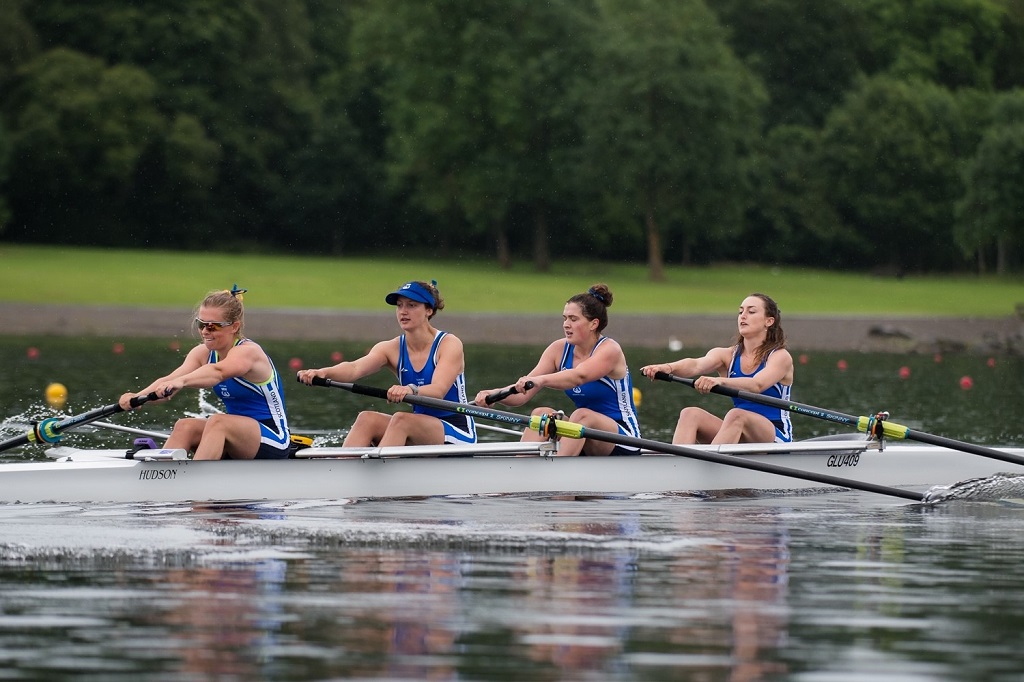 The women’s coxed four of Christy Crook, Catriona Scott, Katie Sugden and Natalie Tysoe, coxed by Holly Bartlett, were all making their Scotland Rowing Team debuts and they executed a superb race plan to come through from third place early on to win by clear water at the finish.
Fiona Bell and Perri McCluskey resumed their partnership in the women’s double scull after finishing third in Cork a year ago.  Bell, who recently represented Great Britain at senior level in the World Rowing Cup in Rotterdam, and McCluskey from Strathclyde Park Rowing Club and part of the British Rowing World Class Start programme, both demonstrated how much they have developed as individuals and as a crew over the past 12 months as they added another gold to the Scottish tally. 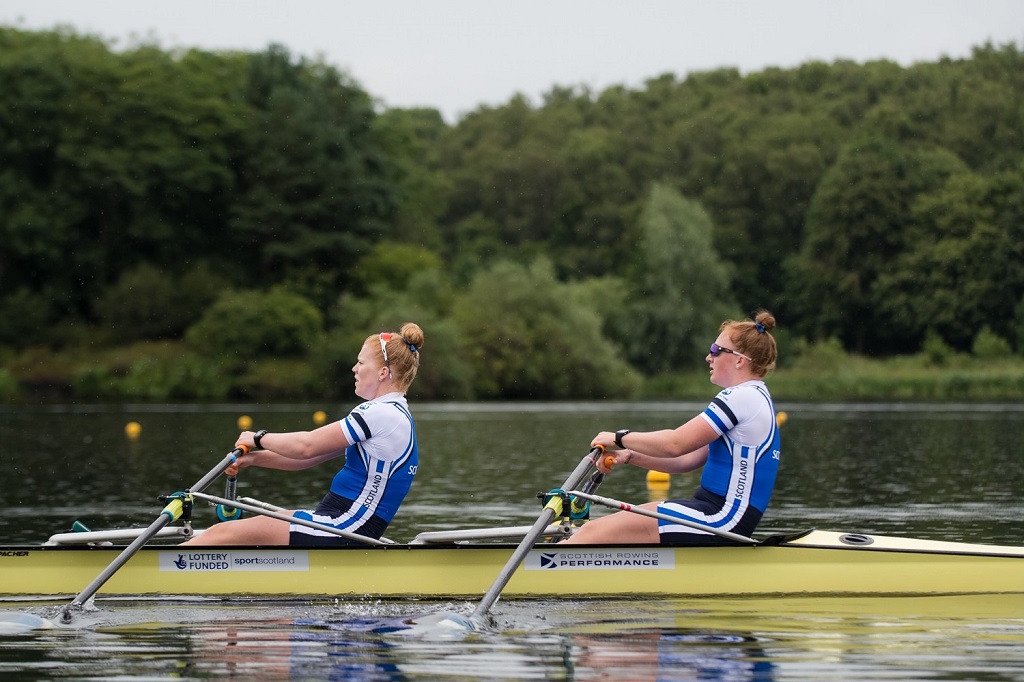 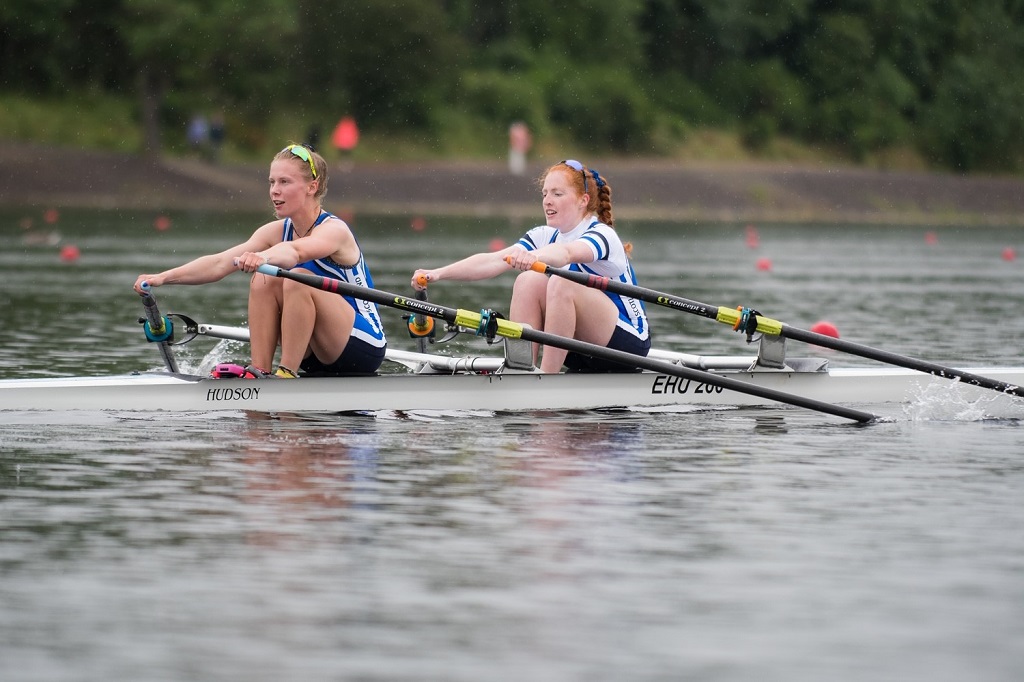 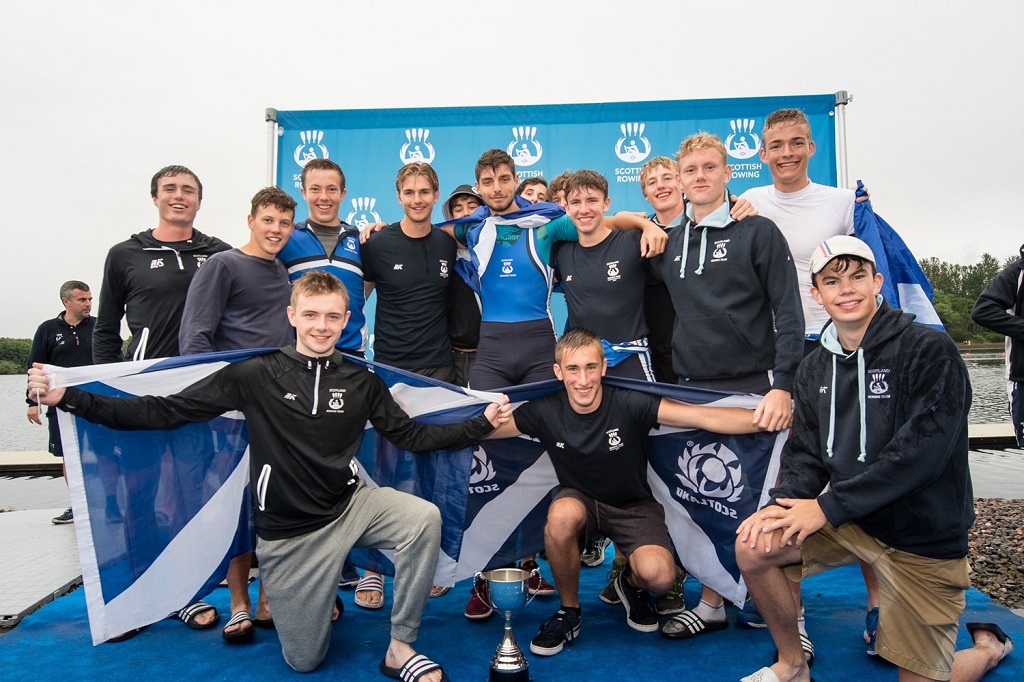 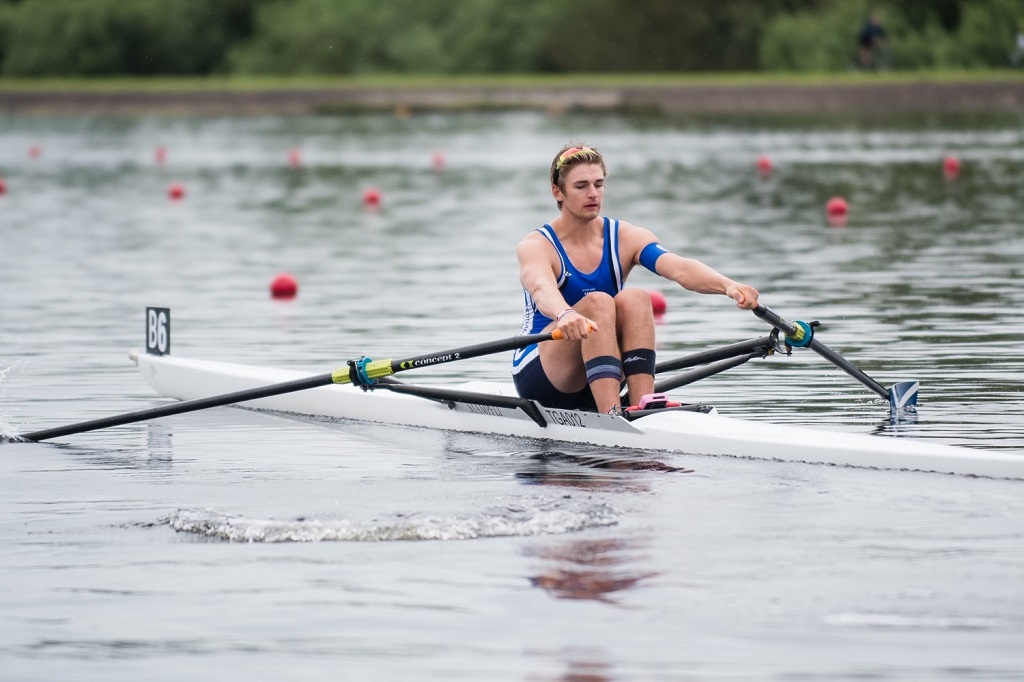 There were a series of strong performances in the junior men’s sweep team that ultimately helped Scotland to the team trophy for the first time in over a decade.  The match had gone right to the wire, with England and Scotland still in contention for the trophy with just the junior men’s eight still to race.
The Scottish eight of Matthew Hughson, Rhuari Stuart, Aidan Graham, Scott Lewis, Chris Bardas, Xander Beeson, Ashley Geddes and Robert Davis, coxed by Youcef Djoudi, recovered from a slow start to get back in contention through the middle of the race.  With only a few hundred metres to go the Scots upped their rate and roared on by the passionate crowd they reeled the England eight in and crossed the line ahead of them to ensure jubilant celebrations on both the water and land.
In the junior women’s coxless four, the Scottish crew of Heather Gordon, Maddie McClure-Rothero, Robyn Patton and Laura McKenzie resumed a rivalry with the English four from Nottinghamshire County Rowing Association.  The two fours had gone head-to-head at the British Rowing Junior Championships in Nottingham the previous weekend with the Scots coming out on top. 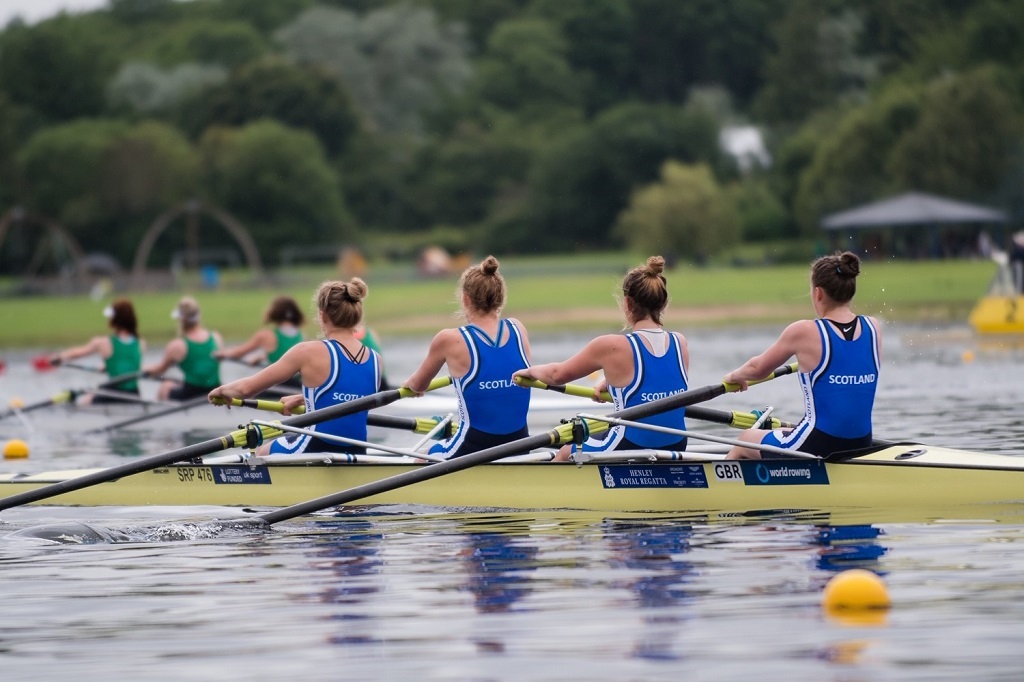