Rio Silver medallist Polly Swann is one of eight Scottish rowers selected by the GB Rowing Team today to compete at the upcoming World Cup II in Poznan, Poland (21-23 June).
The 31-year-old had taken some time out of the sport following the 2016 Olympics to complete her medical degree at the The University of Edinburgh and has been training as part of the Edinburgh University Boat Club supported by the Scottish Rowing performance programme. 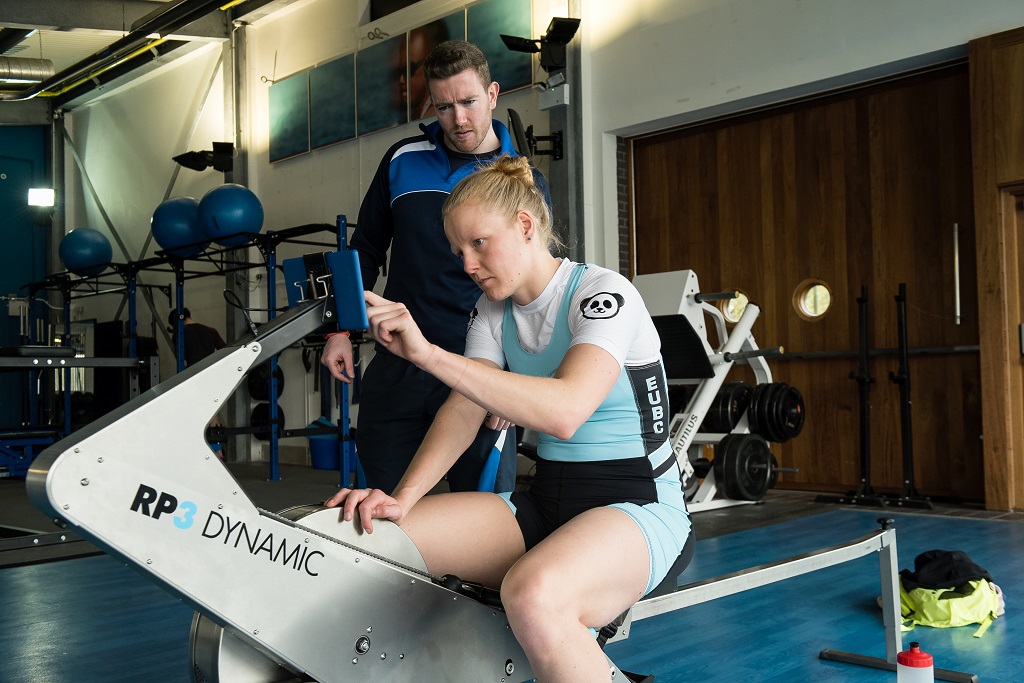 Photo (by Rob Eyton-Jones) | Polly Swann training at the Scottish Rowing Centre in April with sportscotland institute of sport Physiologist Peter Bonner.
As a Scottish Rowing supported athlete from 2018-19 Polly received institute support in physiotherapy and exercise physiology as part of her bespoke training programme.
Swann is selected in the GBR2 women's four alongside Holly Hill, Sam Courty and Annie Withers.
“I’m so excited to be heading out to Poznan,” Swann said. “I really didn’t think I’d be doing much racing this year. I thought I’d be lucky if I got to go to one of the World Cups as a spare and support the team, so I do feel very lucky that I’m racing.
“I’m a little bit nervous because this is my first international race since 2016 but hopefully my past experiences with the GB Rowing Team will get me over the line as well as the other brilliant girls alongside me in the four.”
Also returning to the #GBRowingTeam for the first time this season is Alan Sinclair (GBR2 men's four) and Harry Leask (GBR2 men's single scull) following time out of the boat through injury.
Several athletes who won medals at the European Rowing Championships earlier this month will be looking to build upon these performances.
Sholto Carnegie stroked the men's four to victory in Lucerne whilst Karen Bennett and Rowan McKellar were part of the women's eight that won silver. The GB men's quad featuring Angus Groom is unchanged after their bronze medal.
Elsewhere Maddie Arlett teams up again with Emily Craig and this time they will compete as GBR2 in the lightweight women's double scull after finishing ninth in the openweight class at the Europeans.
READ MORE | https://www.britishrowing.org/2019/06/olympic-medallists-will-satch-and-polly-swann-return-as-part-of-strong-gb-rowing-team-for-world-cup-ii/