One of Highland’s leading rowing coaches, who was unable to perform his role following a stroke, has described a new initiative where he can coach athletes whilst sitting on a tricycle as “life transforming.”
Ian Hunter who, together with his wife Suzanne, coaches a talented junior group at Inverness Rowing Club, including GB Junior squad trialist Sara Johnston, suffered a hemorrhagic stroke in September 2016 which led to complete paralysis of his left hand side.
After eight weeks in hospital then rehabilitation he regained movement of his arm and leg but still had difficulty walking.
Poor balance ruled out him being able to follow his athletes along the canal by bike, the rowing coach’s essential mode of transport.
But last weekend Ian got back on the towpath to coach his athletes for the first time in almost 18 months, this time on the back of a tricycle powered by Sara’s mother, Fiona Johnston.
It was after Fiona took up post recently as Cycling UK’s Development Officer for the North of Scotland, that the solution to getting Ian back on a bike began clicking into place.
Part of Fiona’s remit is to support community cycling groups promoting cycling for everyday journeys.  One of these groups is a collective of Inverness GP practices which is encouraging patients and staff to make more journeys by bike.
Having recently joined the Cycling Without Age initiative, the group has bought a tricycle, funded by Sustrans to transport people who can’t ride a bike themselves. 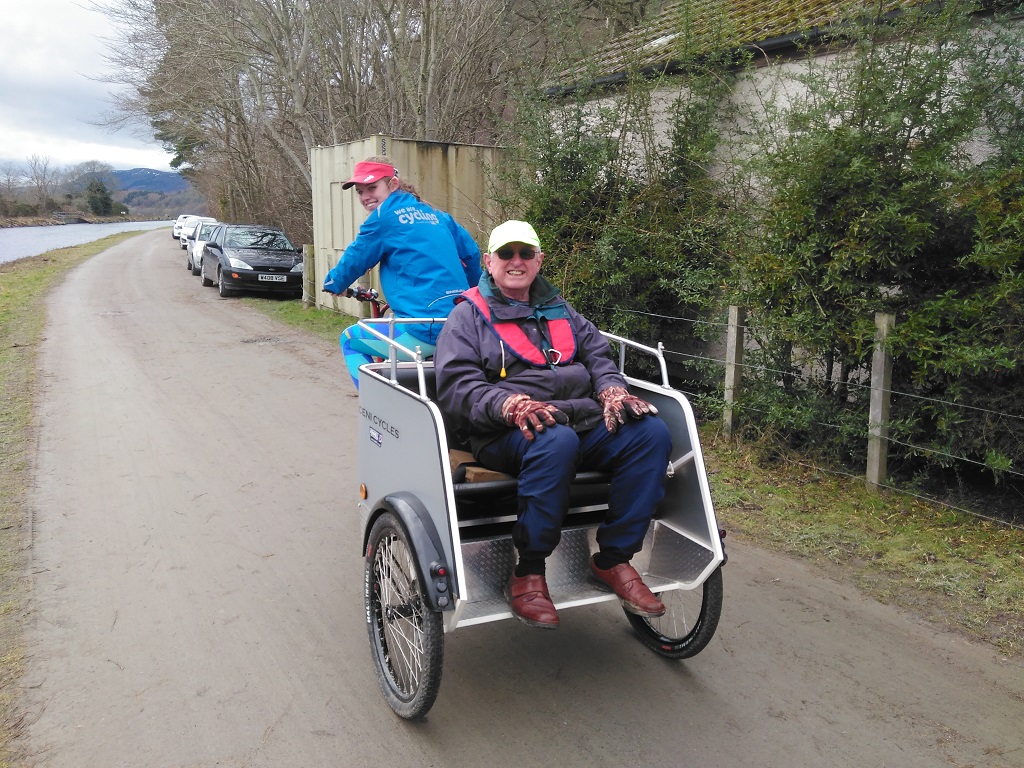 “We are very fortunate that the GP is keen for us to use the trike as much as possible,” said Fiona.
“Last weekend was a very experimental first trike session but Ian said it was better for coaching than when he used to cycle himself.
“Cycling and coaching requires a lot of concentration especially when other people and dogs are using the towpath.  But because I was cycling Ian could concentrate entirely on the boats.
“It makes such a difference to him and it will make a difference to the rowers as well,” continued Fiona, who explained that since his stroke Ian has coached his athletes by producing detailed training plans for the club’s volunteer coaches to relay to the rowers.
“Ever since Ian got out of hospital he’s been at the boathouse every Saturday and Sunday to coach the performance group.
“But it means him typing up incredibly detailed training programmes and relying on parent volunteers like myself or senior rowers to take turns at going on the bikes on the bank and delivering the programme.
“I can deliver the programme and I try and video the training so that Ian can see it afterwards.  But as I’m not a rower I’m not good at picking up fine details and even if I can see what someone is doing wrong I don’t have the knowledge to correct it.  And the performance group have really missed having Ian alongside.
“So, it’s a completely different ball game having Ian out with us on the trike.”
The national rowing coach for Zimbabwe, before moving to Scotland in 2002, Ian said:  “Some of my athletes are at national level. In fact Sara Johnston is being trialled for the GB junior rowing squad, so I demand 100 percent from them.
“Sunday was the first day that I have been able to do my duty in one year and five months.
“As you may have realised it has transformed my life and that of my athletes. For that I am sincerely thankful.”