Rio 2016 silver medallist Karen Bennett led the way as athletes representing Scottish Rowing performed with distinction at the 2017 GB Rowing Team Senior and Under 23 Trials at Caversham this morning.

The Edinburgh-born rower, 28, competing for Leander Club took her first trials title in the women’s pair with partner Holly Norton, finishing over 3 seconds ahead of Women’s Boat Race winner Melissa Wilson, also from Edinburgh, and her Cambridge University partner Holly Hill.  The Edinburgh connection in this race also included Katherine Douglas (Leander Club) and her partner Fiona Gammond who finished fourth after leading the race in the early stages.

Edinburgh University Boat Club (EUBC) cemented its status as one of the leading student high performance rowing programmes in the country as the coaching team of Colin Williamson and John Higson oversaw a number of impressive performances across the various disciplines with two current students and one recent alumna in today’s ‘A finals’ and a number of athletes amongst the leading Under 23 performers.

18-year-old Josh Armstrong, a junior world champion in 2015, provided possibly the most excitement of the day leading out the ‘A final’ of the men’s single scull to the half way point following a strong scull yesterday in both the time trial and the semi-finals.  However the experienced field, featuring several Olympians, clawed back at his lead in the second half of the race and the young Scot finished in sixth place which ranked him as the top Under 23 athlete.

The lightweight women’s single scull ‘A final’ saw a grudge match between two former EUBC crewmates, Robyn Hart-Winks and Maddie Arlett, who were either side of Rio Olympians Kat Copeland and Charlotte Booth.  In a reverse of yesterday’s semi-final it was Hart-Winks, now representing the University of London Boat Club that finished in third behind Copeland and Booth, with EUBC’s Arlett in fifth. 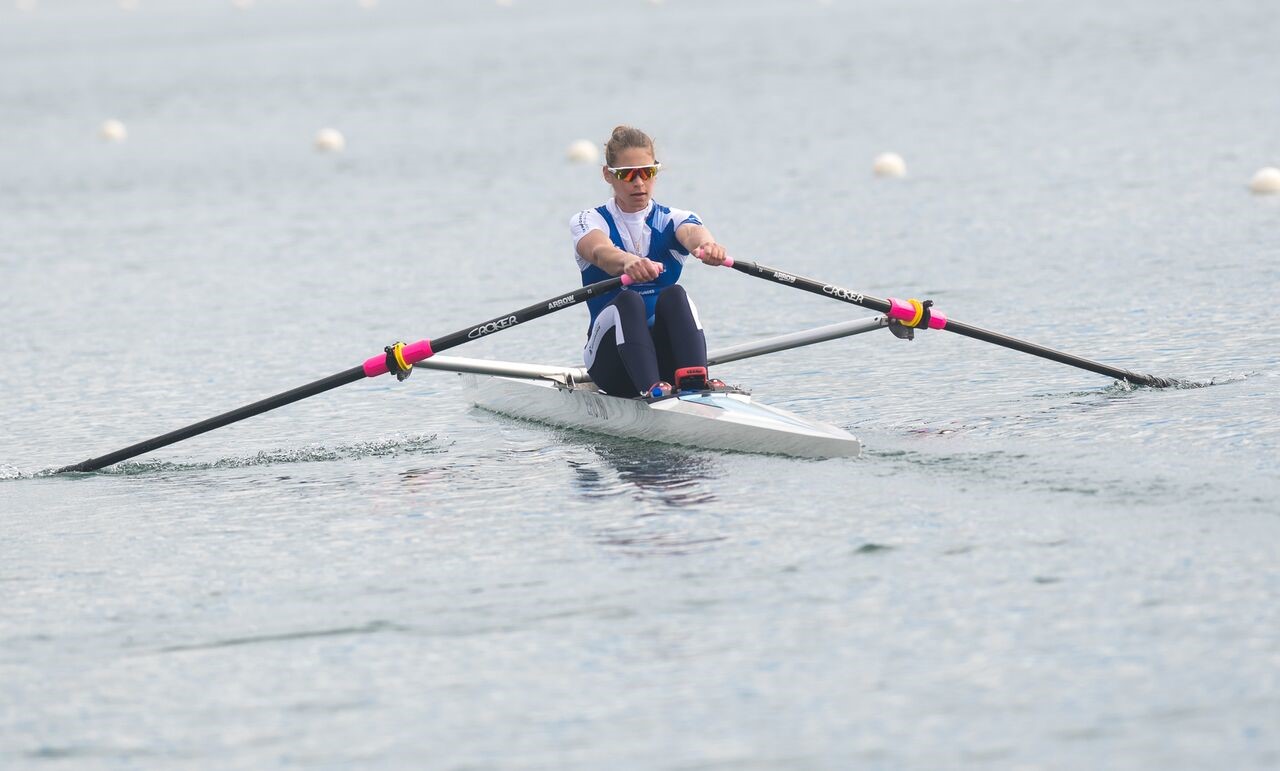 Double world champion from 2015 and 2016, Gavin Horsburgh, was forced to withdraw from the lightweight men’s single scull trial due to injury following his fourth-place finish in yesterday’s time trial.  Horsburgh’s training partners at EUBC, Matt Curtis and James Temple, enjoyed success of their own finishing third in the ‘B final’ and second in the ‘C final’ respectively, ranking them first and third in the Under 23 age group.

Aviemore’s Calum Irvine and EUBC partner Oli Wilkes produced a really quick middle thousand to take control of the men’s pair ‘C final’ which they won comfortably from Oxford Brookes University and the University of London.  Hamilton’s Graham Ord was unable to race his ‘D final’ as a result of an injury to his partner from Bristol University. 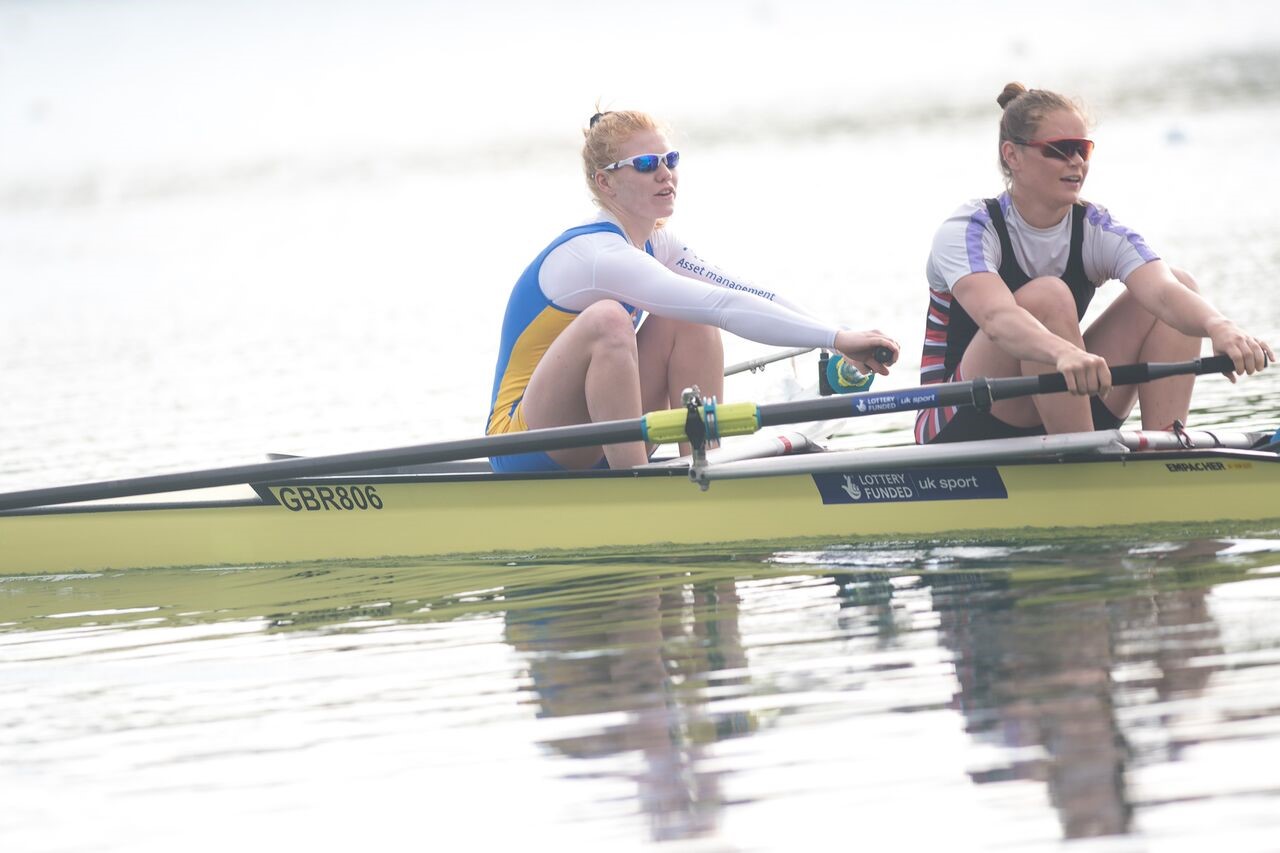 In her first season in the GB trialling process, Aberdeen University student Fiona Bell from Kilmacolm enjoyed a memorable weekend with Imperial College London partner Isobel Powell.  The composite women’s pair impressed throughout, ranking second in the Under 23 age group following a third-place finish in the ‘B final’.

Clydesdale ARC’s Jack Burns finished fourth in yesterday’s ‘C final’ of the men’s single scull after narrowly missing out on a place in the A/B semi-finals by less than a second in the time trial.

Elsewhere there were many encouraging results for English-based Scots across the different disciplines.  In the men’s pair, Edinburgh’s Callum McBrierty (Leander Club) and partner James Rudkin (Newcastle University) were fifth in the ‘A final’ with Cameron Buchan from Dunipace and Adam Neill (both Leander Club) fifth in the ‘B final’.

Edinburgh’s Harry Leask was second in the men’s single scull ‘B final’ which ranked him second in the Under 23 age group behind Josh Armstrong.

“Many congratulations to Karen on her first GB Rowing Team Trials title and to all of our athletes that stepped up their performance levels this weekend.  A special mention must go to Josh Armstrong who produced a sensational performance in his first year as a senior athlete.

“It has been an outstanding weekend for Scottish Rowing with many athletes having made a strong claim to an international vest this summer and we wish them all well as they continue through the crew formation stage of the selection process.

“I’d like to offer my sincere thanks to the sportscotland institute of sport, Winning Students and Edinburgh University for supporting our preparations for these trials and of course to our excellent coaching team in our clubs who work tirelessly to help our athletes maximise their potential in the sport.”

* withdrew before final because of injury

Gavin Horsburgh (Edinburgh University) finished 4th in Saturday’s time trial but had to subsequently withdraw from the trials due to injury.

Full results can be found on the British Rowing website: