University of Edinburgh student Polly Swann showed encouraging signs on her long awaited return to the GB trialling process after finishing the first stage of the selection trials on the weekend as the fastest female single sculler.
On paper one might expect the Rio silver medallist to be putting in good performances at this stage of the Olympic cycle.  But life for the Edinburgh 30 year old has been anything but routine since Rio.
After Rio Swann took time out of rowing, partly to adjust to the demands of resuming her medical degree in Edinburgh.
Then this January a long standing back injury worsened to the point where it “properly went” and she spent the best part of a month in bed.
It was only in late July that she eventually got back into a boat.  So, quite understandably, surprise was her overriding emotion at finishing first on the weekend in Boston, Lincolnshire.
“I’m really pleased and I wasn’t expecting it at all so it was a bit of a shock,” admitted Swann.
“I didn’t have any pressure on myself because I’ve just come back from injury.  This was my first trial for a really long time so I thought I’d come and do my best and I was pleasantly surprised.”
Swann is quick to point out that none of the GB Rowing Team’s 2018 World Championship athletes were competing at these trials but that does not detract from her remarkable recovery.
“I don’t really feel particularly fit and I’m definitely not anywhere near as fit as I could be,” she explained.
“I think today was more of a case of mind over matter. And maybe because I didn’t have any pressure on myself it freed me up to just go and perform and see where I was at.
“It’s definitely the most relaxed I’ve ever felt coming to Boston so maybe that was something to learn.”
Combining rowing with her final year of a medical degree is a tall order for an athlete who would dearly love to make it back onto Team GB for the Tokyo 2020 Games. 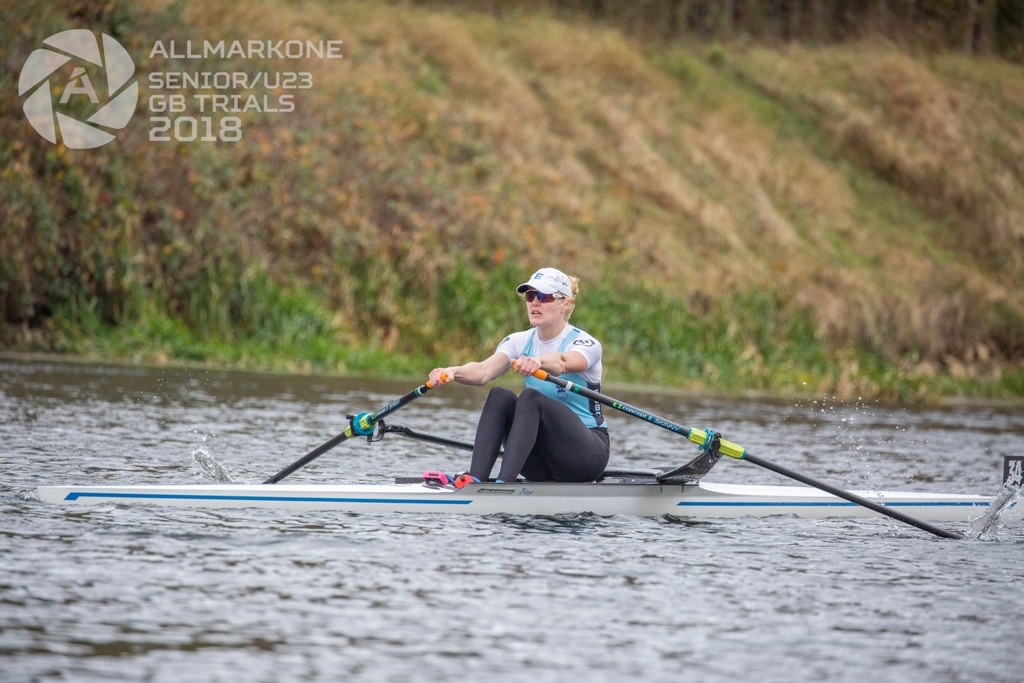 2019 will be an Olympic qualification year, making the coming months a continuation of the delicate balancing act since her injury.
Swann’s comeback necessitated a very different approach.  As a Scottish Rowing supported athlete she has the integrated support of sportscotland institute of sport, specifically physiologist, Peter Bonner, and physiotherapist, Sarah Watt who have worked in tandem with her coaches at Edinburgh University, Colin Williamson and John Higson, as well as David Hughes, who has been managing her gym programme.
“We have approached my programme quite differently from how I would normally train for rowing,” explained Swann, who last month also won the women’s double scull title with Lucy Glover at the British Rowing Championships on her first competitive return to the boat following her extended injury.
“Because I’m in my final year studying medicine I have quite long days in a hospital or my GP practice, so I’m only really able to train once a day in the week and twice a day on the weekend.  Whereas, if I was training full time, I would be training three times a day.
“We have had to throw out the rulebook and think about how we can create a programme that’s going to work even though I can’t row as many hours as normal.
“Also on top of that we have to think about how we are going to manage my back situation as well so we have been as risk averse as possible.
“Sarah and Peter have been controlling the programme with the on-water training being managed by Colin and John.
“That makes this programme quite different from anything I’ve done in the past because it would normally be the coach that creates the programme.”
At this stage the level headed Swann sees her Boston result as a stepping stone with the real test of racing the girls on the current GB squad coming further down the line.  And she has no illusions it will be easy.
“I’m going to take one stage of the trials at a time for now,” she said.   “The team are all going to be really strong coming into Olympic qualification year.
“So yes I am really pleased how I’ve done but I have to be realistic as there’s plenty of girls in the team at the moment that will be much faster.  So I’ve got to set my sights on them.”