Twenty-year-old Armstrong won gold in the under 23 men’s quad, the same boat class that he had enjoyed success in as a junior back in 2015, showing just how well he is maturing in the sport.

“We knew that one of our strengths was our start so we got off clean and we were about half a length up coming through the 500,” said the University of Edinburgh student who is supported through the Scottish Rowing performance programme.

“In the middle kilometre our good pace allowed us to move away from the pack and extend the gap over Italy and Germany.

“It was quite choppy in the last 500m so we kept it safe and maintained the gap.”

Great Britain took gold winning by over a length from Italy, with Germany in third place. 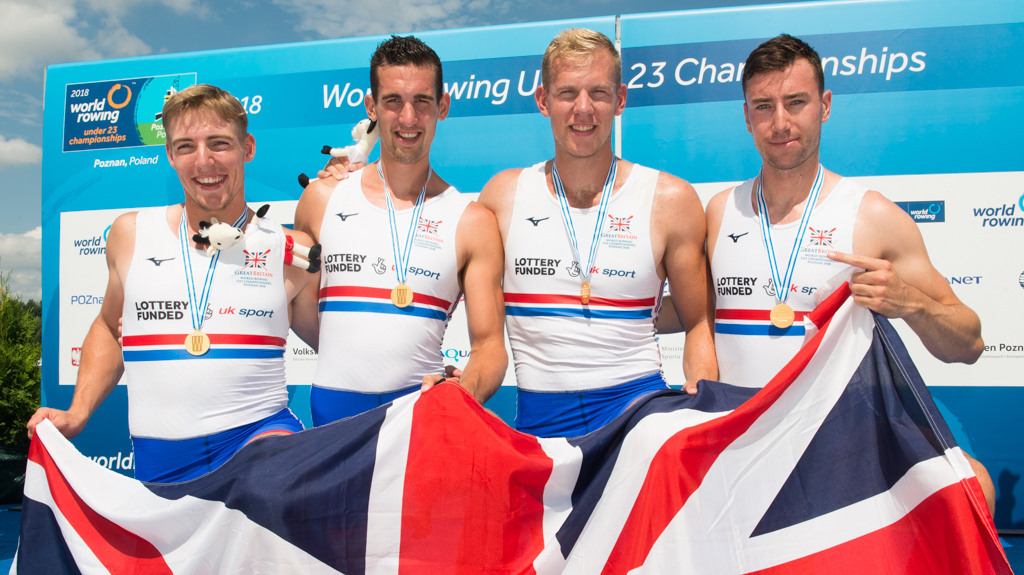 “We executed the race plan we wanted to and I am really happy with how it went today,” said Armstrong with a sense of relief at finally overcoming what he termed a “difficult” period where he has suffered his share of injury and was unable to train at full efficiency.

“But in the second half of the season I’ve really got stuck into training and obviously the programme at Edinburgh is on the level that you can get into the top boats and produce medals at world championships.

“And so it was just following the programme and keeping my head down and doing everything that I could to make sure I was in the best position.”

Following seat racing at Caversham, Armstrong was selected for the quad with the equally impressive Sam Meijer, Rowan Law and Matt Haywood.

Reducing his ergometer 2km PB “substantially” earlier this month was a clear sign the Scot was fitter and stronger than ever and a near perfect match for his team mates.

“Obviously all the guys are at the top physiologically so it was just a case of making sure we got ourselves together rowing tidily enough to utilise it well,” he said.

“So it’s great to come away with a performance that we knew we were capable of.”

And although it’s impossible to decide whether his latest success surpasses the junior gold of three years ago, nothing beats the feeling of being back on top of the podium: “Under 23 is obviously an older age group so some may say it’s a bit harder to win.

“It’s great to get back on the top step of the podium, it’s an awesome feeling, definitely at least as good as winning juniors in 2015.”

Great Britain won three gold medals and secured eight medals in total to record their best ever performance at the World Rowing Under 23 Championships. This haul included a bronze medal for Edinburgh University athlete Lucy Glover and the Great Britain women’s quad, her second consecutive medal in this boat class at under 23 level.

Lee Boucher, Scottish Rowing Head of Performance Pathway, said: “I am delighted that athletes from Scottish programmes have contributed towards the best ever performance by the GB Rowing Team at the World Rowing Under 23 Championships in what has been a record year for Scottish representation on the team.

“Many congratulations to Josh and the men’s quad for a series of outstanding performances throughout the week culminating in their place at the top of the podium.”

The Scottish Rowing performance programme works in partnership with the University of Edinburgh and is supported by the sportscotland institute of sport and Winning Students.