And organisers have today agreed on an 11-day sports programme (2-12 August 2018), with 10 days of television coverage starting on Friday 3 August. The news comes just two months after the EBU confirmed that over 35 of its members, including the BBC, have now signed up to show the first edition of the new multi-sport concept in 2018.

The 11-day sports programme contains two action packed weekends that will see venues across Glasgow and Scotland come alive as Europe’s finest athletes do battle in a bid to be crowned European champion. 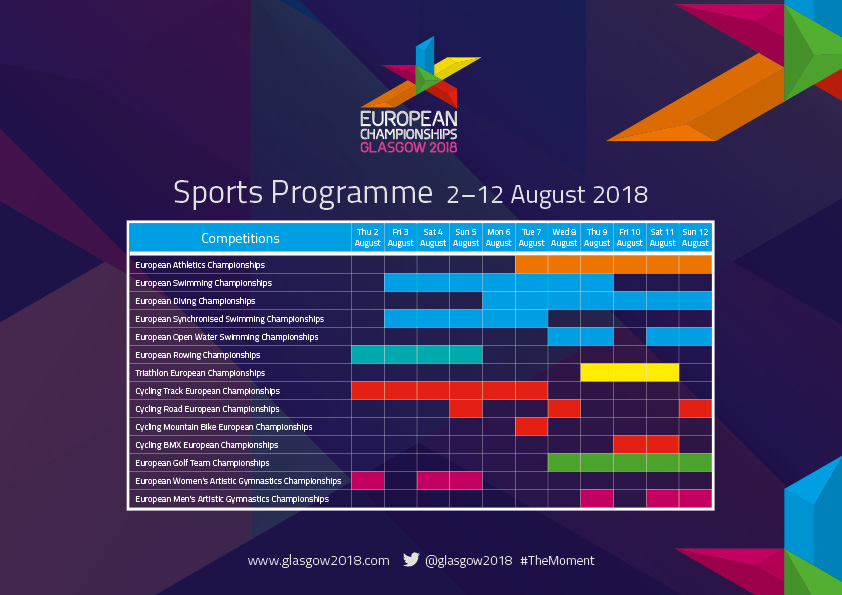 Aileen Campbell, Scottish Government Minister for Sport, said: “The Championships are an excellent platform to showcase to a global audience just how good Scotland is at hosting major events, and the fact we are going to have 11 action packed days of sport only adds to that spectacle.

“We have an outstanding track record of successfully hosting events watched across the world and I’m sure that people across Scotland will welcome athletes and give them an experience that they’ll never forget.”

Councillor Frank McAveety, Leader of Glasgow City Council, said: “Excitement is building ahead of the Glasgow 2018 European Championships, with the final sports programme ensuring that Glasgow will continue to shine on the global stage.

“The fact that the city will be hosting an event watched by a potential television audience of one billion people is a golden opportunity for us. We will use the magical moments that the athletes, our fantastic home crowd and our many visitors will create to showcase everything we have to offer as a visitor destination.”

European Athletics President Svein Arne Hansen, co-chair of the European Championships Board, said: “The European Sports Federation members of the 2018 Board are fully supportive of having an overall programme that will deliver a schedule packed with exciting finals and gold-medal moments for television. We all believe in the power of aggregation and the benefits for our sports that come from bringing our championships together in this exciting new event.”

Fellow co-chair Paolo Barelli, President of the Ligue Européenne de Natation (European Aquatics), said: “The sports programme in Glasgow will start with a number of qualifying rounds on Thursday 2 August before a packed weekend of sport on television starting on Friday 3 August. This optimised 10-day television program will create a fantastic viewing experience with audiences able to follow finals in multiple sports across the day and evening, with great storytelling opportunities for broadcasters. Indeed, it will intensify even further the power of aggregation that this European Championships provides.”

Stefan Kuerten, Director of Eurovision Services and Sports Rights, said: “We are very happy with this exciting 10-day television schedule for the 2018 European Championships. In a multi-sport event, you can choose between the different sports and the opportunity to follow your national athletes across a variety of sport.

“Television and radio channels will be able to switch from one highly attractive sport to another without interrupting their program and digital platforms will propose a large choice of content which will accommodate all viewers. Furthermore, it creates a close synergy between Glasgow and Berlin, with broadcasters able to crisscross between events in both cities as they follow their respective national medal hopes.

Visit www.glasgow2018.com for further information on the Glasgow 2018 European Championships.

1. The 2018 European Championships will be staged by the European Federations and the Host Cities of Glasgow and Berlin.

3. The European Broadcasting Union (EBU), the umbrella body for Europe free-to-air channels, will be the broadcast partner for the Championships. There is a potential television audience of around 1.03 billion for the event with many more viewers across multiple digital platforms.

4. Around 3,000 athletes will travel to Scotland as part of a total delegation of around 8,500 including officials, media and others. A further 1,500 athletes will compete in Berlin.

5. Berlin's Olympic Stadium will be the venue for the European Athletics Championships with the road races and race walking events held throughout the city.

7. Four European Cycling Championships will be staged in Glasgow and its metropolitan area. Track, Road, Mountain Bike and BMX will attract 650 of Europe’s top names to the Sir Chris Hoy Velodrome, the Cathkin Braes Mountain Bike Trails, the streets of Glasgow and a new world championship and Olympic standard BMX track to be built in the Knightswood area of the city.

10. The European Championships for both Rowing and Triathlon will both be staged at Strathclyde Country Park in North Lanarkshire.