Posted: August 11, 2017
When three young Scottish rowers were selected for their first senior World Rowing Championships this week it was not only a defining moment for the athletes themselves - Maddie Arlett, Robyn Hart-Winks and Gavin Horsburgh - but also for the Edinburgh University Rowing Programme which has helped develop them.
There was already a hint that the Scottish athletes might be included in the GB Rowing Team headed for Sarasota-Bradenton, Florida next month (24 September to 1 October) after all three made senior debuts this summer.
Arlett (Selkirk) and Hart-Winks (Kirriemuir) had been part of Britain’s silver medal winning women’s lightweight quad at World Cup 2 in Lucerne, whilst Horsburgh (Lochwinnoch) competed in the equivalent men’s boat in World Cup 2 in Poznan.
But the reality struck home yesterday when British Rowing announced its senior team and, now they know they are booked on the plane to Florida, all three believe they are capable of medalling.
“We will focus on it one step at a time but if you were going for a competition like this and you weren’t aiming for the medals then you don’t have your head in the right place,” said a cheery Horsburgh.  “So we are definitely going for the medals this time.”
Whilst the talented 19-year-old Horsburgh, a former world champion at under 18 and 23 levels, had been a rower at Castle Semple and at Glasgow Schools and Academy under coach Iain Somerside before starting university, Arlett (23) and Hart-Winks (24) only started rowing when they began studying at Edinburgh.
“I started the novice rowing programme at Edinburgh University five years ago but my first two years of rowing weren’t too serious,” said Hart-Winks, who as a top level, and former world champion highland dancer, ran the two activities side by side.
“I was still dancing a lot but then in my third year I heard about lightweight rowing and that’s when I thought I might be able to do something with it.”
Her decision to do so coincided with the appointment of Colin Williamson as the university’s first ever full-time head coach and fellow professional coach, John Higson, who would become her individual coach.
The performance environment in Scotland had become increasingly healthy with joint investment between Scottish Rowing and the university sector supported by the sportscotland institute of sport and Winning Students.
But the perfect training scenario only became complete for Hart-Winks when Maddie Arlett decided to start rowing too.  The pair soon became inseparable friends and dedicated training partners.
“It’s been amazing for me and Maddie to come through the system together,” explained Hart-Winks, who will join forces with Arlett in the women’s lightweight quadruple scull at the world championships (the full crew is pictured below at yesterday’s announcement). 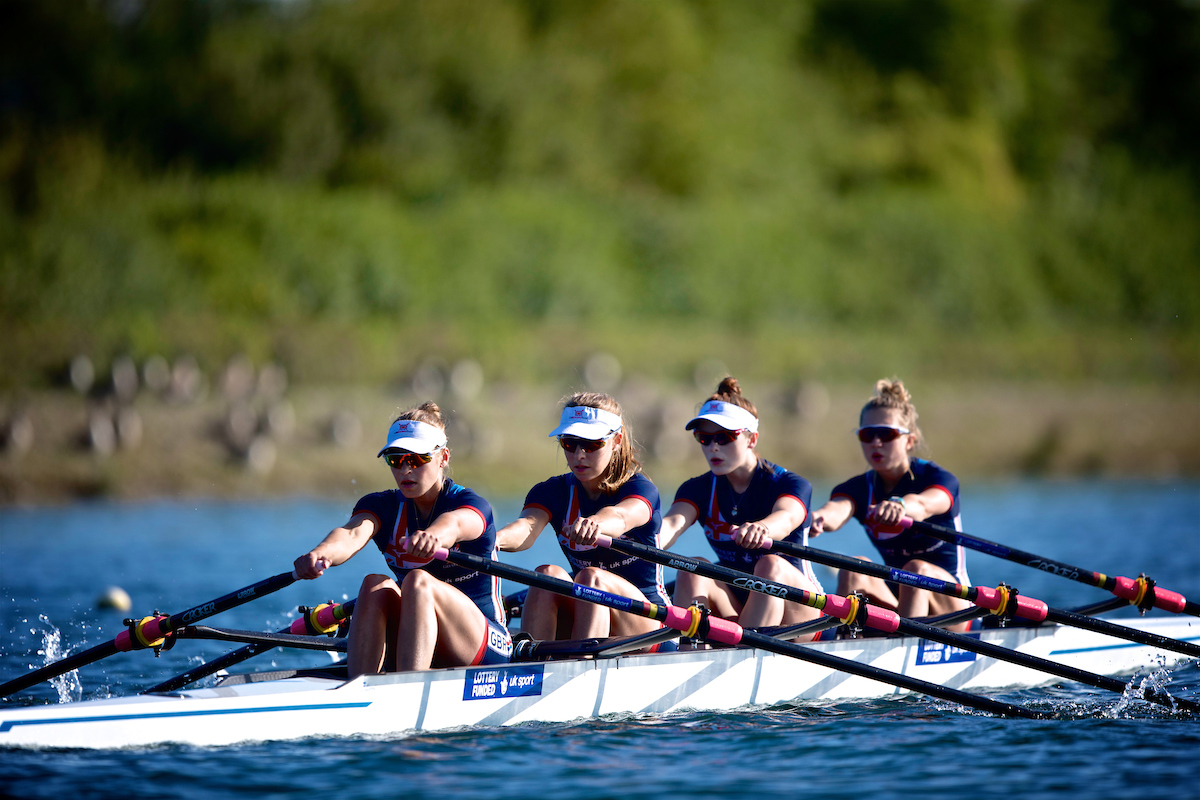 “The first year that I started taking it seriously was the first year Maddie and I began rowing together in lightweight rowing and we got third in the BUCS regatta as lightweight pair which was a big achievement at the time.
“Maddie and I lived together for a few years in Edinburgh and it’s always been pretty close between us in training.
“We were competitive, we pushed each other, but that’s what drives you on and makes you go faster and I think that without Maddie and John Higson - we were the three musketeers - I wouldn’t be here.
“We’ve been on a gradual rise so it’s pretty cool we’ve come through the Edinburgh system together and pretty impressive for Edinburgh to get two novices to the senior Worlds in just a few years,” added Hart-Winks who graduated from Edinburgh last summer.  “It’s really nice to be reunited for the senior Worlds.”
2017 has been a year of peaks and troughs for Gavin Horsburgh who missed the final race of the GB selection trials in April due to injury.  And, after a great start in last month’s under 23 World Championships, illness in the crew meant they had to withdraw.
But a fine result in the GB selections’ time trial led to Horsburgh’s first ever GB senior seat at the third World Cup of the season in Lucerne, where he proved his worth, and he will end the season on a high at his first senior World Championships.
“I was striving to see if I could get a spot in the Senior Worlds team but with such a strong group of athletes I thought it would be quite a challenge,” said Horsburgh, who will compete in the lightweight quad scull in Florida (pictured below). 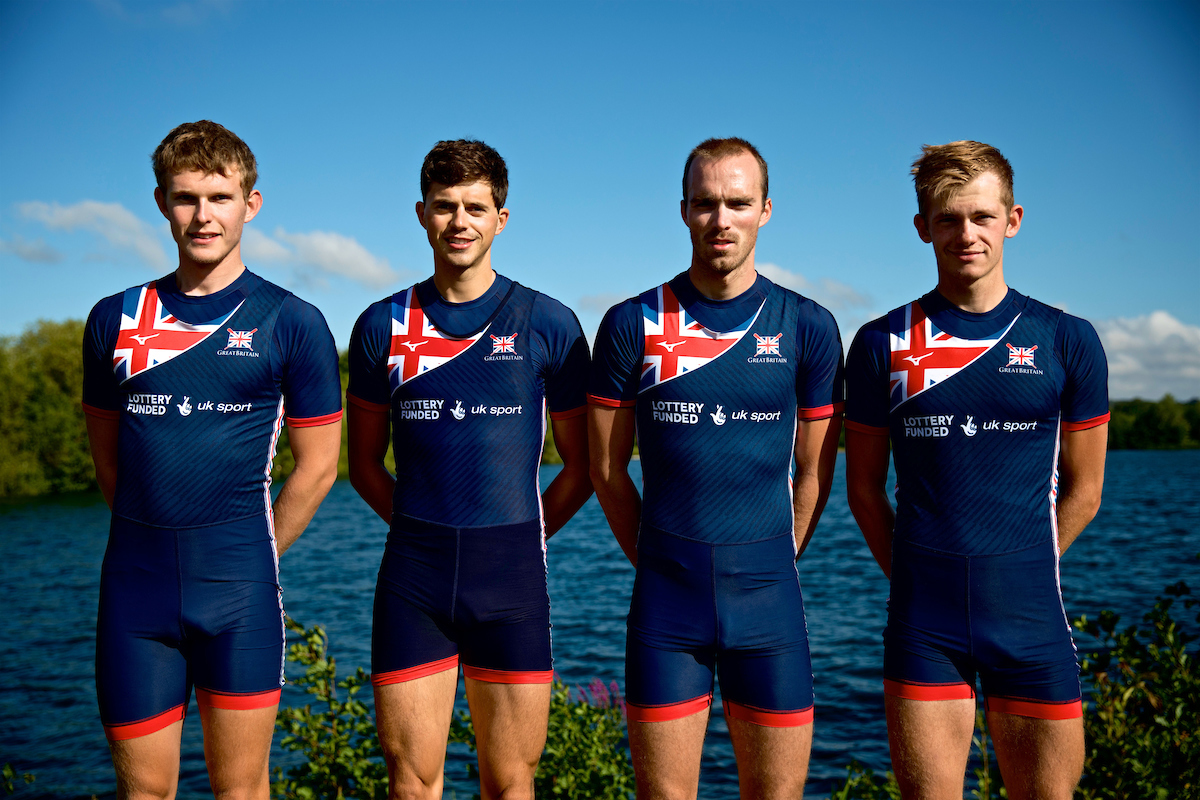 “I feel I have been given another chance to get another crack of the whip now which has really got me excited for the coming month to make the boat go faster and hopefully be in the run for medals
“These are guys who I’ve looked up to for a long time.  We’ve got members of the senior squad who have been in the system for a while, a strong group of guys and we seem to be able to click well together.
“With the technique Colin has helped me with I have been able to slide straight in because we are pretty similar.”
Since its beginnings the Edinburgh University programme has developed quickly, becoming in 2015, Scotland’s first GB High Performance Programme, and a go to rowing university for students north and south of the border.
More Scottish rowers, developed in Scotland, competing for Great Britain at the Olympics and Paralympics has been a Scottish Rowing mission which is bearing fruit.
Now that the university has delivered its first three athletes onto a GB senior world championships team, the proof is it works.
"This is a fantastic milestone reached, both for these young athletes and our rowing programme,” said Edinburgh University Head Coach, Colin Williamson.“We have been working over the past four years to build a system which allows any young athletes with the necessary drive to fulfil their potential in the sport, whether they come to us as complete beginners, as was the case with Robyn and Maddie, or accomplished juniors, like Gavin.
“This is the culmination of many people and institutions working hard to provide these athletes with the necessary platform to compete on a World level."
A total of nine Scottish athletes will compete for Great Britain at the World Rowing Championships.
Alan Sinclair returns from injury to take up a place in the men's eight alongside Callum McBrierty.  Karen Bennett switches from the women's pair to the eight where she is joined by Katherine Douglas.
The other Scottish selections include Melissa Wilson in the women's pair and Sam Scrimgeour in the lightweight men's pair whilst Cameron Buchan is named as a spare.
Scottish Rowing’s Head of Performance Pathway, Lee Boucher said:  “Many congratulations to all of our athletes selected to compete in the World Rowing Championships and thank you to our coaches and partners who have supported them on their journey.
“This is a proud moment for Scottish Rowing to see home-based athletes competing at senior World Championship level.  We wish the entire GB Rowing Team success for these championships.”
Pictures by British Rowing