The London 2012 Olympics had a profound effect on numbers of people taking up rowing.

So large was the flood of interest at Stirling Rowing Club that it only recently worked through the waiting list it accrued four years ago.

Scotland’s newest rowing club is beginning a membership drive which it believes will give people in Perth and Dundee their first opportunity to row.

Castle Semple Rowing Club is getting organised to make the most of an expected surge of interest in rowing following this summer’s Rio Games.

Read more: More adult members is the focus as Castle Semple signs up to Project Rio

It wasn’t just the sun that was shining at Caversham as Scotland’s up and coming rowers made an early season statement of intent at the GB Rowing Team Senior, Under 23 and FISU Trials.  The trials aim to identify rowers for the non-Olympic summer programme which includes the World Rowing Championships and World Rowing Under 23 Championships (both being held in Rotterdam, the Netherlands - 21-28 August) and the FISU World University Rowing Championships (Poznan, Poland – 2-4 September).

Two rowers from Aberdeen are amongst five Scottish rowers selected to represent Great Britain at the 2013 World Rowing Under 23 Championships. Iona Riley and Lewis McCue are part of University Rowing Aberdeen, a unique partnership between the University of Aberdeen and Robert Gordon University and supported by Scottish Rowing. Additionally, both rowers are supported by the sportscotland institute of sport which gives specialised support to aspiring athletes with ambitions to make the Olympic podium.

Louise Martin CBE, Chair of sportscotland, said: "Congratulations to all of our Scottish rowers on being selected to compete for GB at the Under 23 World Championships. After last summer's terrific Olympic gold medals for Heather Stanning and Katherine Grainger, it is wonderful to see talented Scottish rowers coming through the system and competing at the very highest level in their age category. I wish them every success in Austria."

From Friday 24th to Sunday 26th May, ASRA athletes joined 4,000 junior rowers from all over the U.K. to take part in the annual National Schools' Regatta at the English National Watersports Centre in Nottingham. Against a background of a whole series of spectacular medal-winning performances, special mention has to be made of ASRA's Junior 15 Boys' Four which not only won gold and with it the prestigious Mariners Cup, but also shattered the record for their event which had stood for the last 14 years by an almost unbelievable 6 seconds.

Glasgow Rowing Club's Junior 16 Girls' Double took Silver at the National Schools’ Regatta on 26 May 2013. Helena Davison (Giffnock) and Kathleen Castell (Bearsden), commonly known as HelKat, saw off competition from 30 crews, through a qualifying time trial and semi final, only being beaten in the final by the crew from Marlow Rowing Club.

The rewards made the journey to the British Rowing Junior Championships at Nottingham worthwhile for Scottish clubs this weekend.  A record breaking weekend of racing saw Aberdeen Schools RA winning a number of medals including two golds in WJ 4- and OJ 4- as well as two silvers and a bronze.  These performances also secured the Victor Ludorum trophy for ASRA which was proudly presented to coach Colin Wallace by Scottish Rowing President Mike Morrice.

Alex Rankin and India Somerside from Glasgow Schools Rowing Club made a bit of history last weekend when they raced five events at Ghent International Regatta and won them all. In particular, on Sunday, they had a clean sweep of women pairs winning J18, U23 and Womens in a four hour timescale. 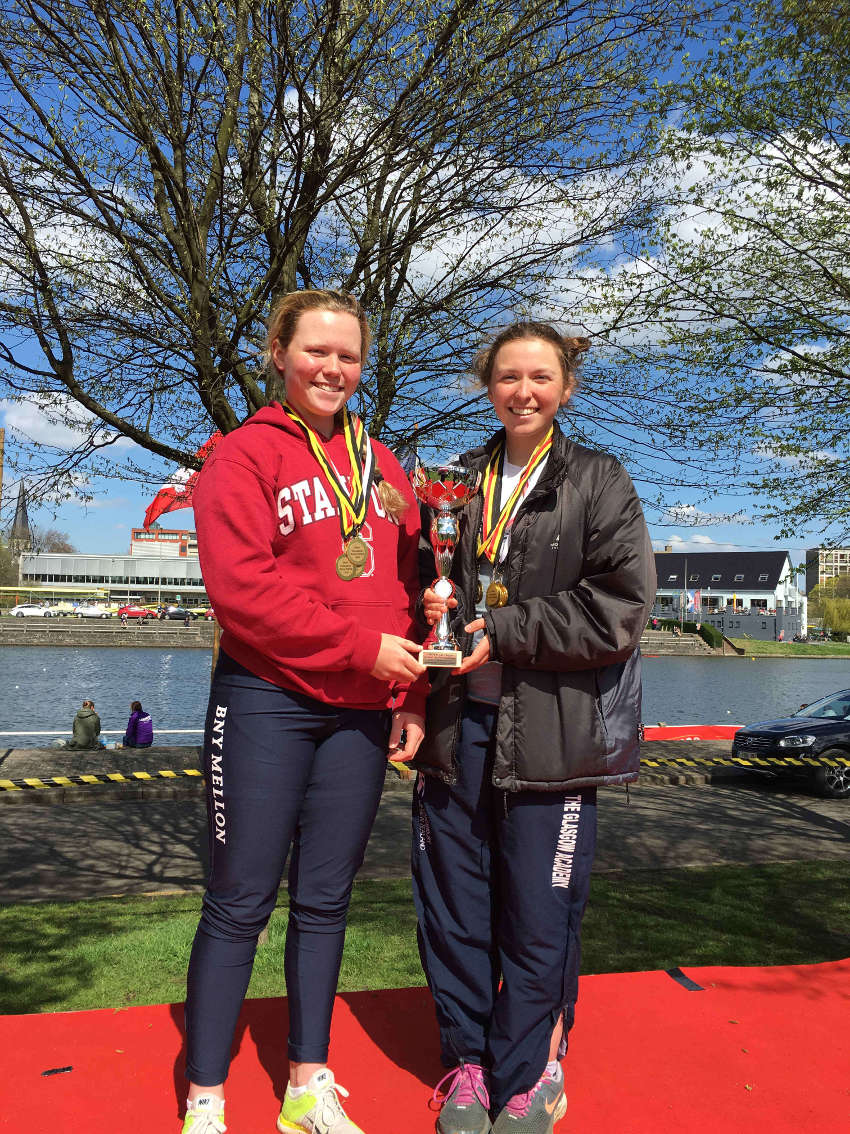 The other wins were on Saturday J18 pairs and women fours with their GB teammates from Hartpury College.

The 18th of March saw Scottish Rowing, in partnership with both Glasgow and Edinburgh Universities, host the Scottish School’s Indoor Regional Championships.

The simultaneous events saw over 200 pupils from around 20 schools stretching from the West coast to the East coast of Scotland compete, both individually and as part of age group relay teams, all in the name of school pride.

Reigning Olympic Champions Katherine Grainger and Heather Stanning are among the Scottish rowers named in the GB Rowing Team for next month’s European Championships – the first major selection of the Rio 2016 Olympic season.

Former World Champion Polly Swann returns to the team after missing last season through injury, while Alan Sinclair has fought off some fierce internal competition to secure a place in the men’s pair.

Relative rookies Karen Bennett and Angus Groom also get the nod from the selectors, while Imogen Walsh and Sam Scrimgeour are also in the squad for the regatta in Brandenburg, Germany from May 6-8.

Seats in the GB Rowing Team for the non-Olympic summer programme will be the target at Caversham over the next two days as 16 rowers representing Scottish Rowing get set to compete against some of the leading rowers from across the country at the GB Rowing Team Senior and Under 23 Trials.

15 Scottish rowers will be looking to book their seats on the plane to Rio at next week’s Olympic trials organised by the GB Rowing Team at Caversham, near Reading.  Whilst reigning Olympic Champion Katherine Grainger is sidelined with a ‘minor niggle’ the record Scottish contingent features a mixture of established internationals and emerging talent.