Two of the Scottish rowers that travelled to Rio de Janiero for the World Junior Rowing Championships with the GB Rowing Team were part of the junior men’s quadruple scull which produced a storming finish to win a historic gold medal.

Glasgow Academy rowers Gavin Horsburgh and Joshua Armstrong along with crewmates Sam Meijer and Chris Lawrie were fifth at halfway but surged through the field to take a first-ever men’s quad title for GB in memorable fashion.

Gavin, Joshua, Sam and Chris had impressed in both the heats and semi-finals of the men’s quad in Rio but found themselves towards the back of the field in the opening stages of Saturday’s final.

They were in fifth place and a length down on the front three at the 1k mark but that was the cue for a massive surge by the British boat.

They began slicing through the field and, after overtaking New Zealand to move into third place with 500m to go, maintained their remarkable power and pace to reel in both Ukraine and long-time leaders Germany to take gold in 6:05.36. 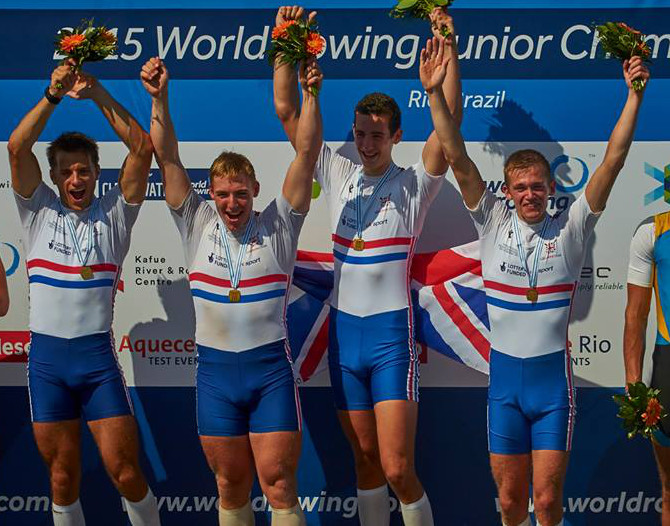 Meijer and Lawrie, who were part of the quad that won silver at last year’s World Junior Championships, praised coach Robin Dowell after their win.

“Although we were a bit down on the field after 500m we were not worried,” said Meijer. “Our coach had told us to chisel away with each stroke and just dig in, and that brought us up to the rest of the field by halfway.”

When asked about the other crews going out strong, he added: “We expected that could happen and we thought they might wear themselves out so we stuck to our game plan.”

Lawrie, when asked what it was like in the last 400m when they were going so fast through the field, said: “Our coach, Robin, said we had to do three ‘tens’ in the last 30 strokes. We stepped it up twice and then the last ten was for gold – that is what made us champions.”

Fellow Scot Gregor Duncan from ASRA was part of the men’s eight which made a good challenge for a podium place in the final race of the day and were second at the halfway stage after a strong start.

As the Netherlands made a decisive break, there was little to choose between the next four crews during an exciting charge for the line.

Another rower from Glasgow Academy Alex Rankin in the women’s four made it through to the A final. The final was effectively three races in one, with the United States just getting the better of Germany in the battle for gold. They had a clear-water advantage over New Zealand, who managed to hold off China for bronze.

Alex Rankin, Georgie Grant, Nuala Gannon and Megan Slabbert in the British four found themselves contesting fifth place with the Italians and there was nothing to choose between the crews for 1,700m.

All of the British crews placed in the top nine in the world and Sir David Tanner, GB Rowing Team Performance Director, was delighted with the rowers’ efforts.

“It has been a good day for our team,” he said. “All six finalists brought credit to themselves.

“There were impressive silver medals for the men’s four and women’s quad, then that quite exceptional performance from the men’s quad to take the field apart completely in the last 600m.

“That is the first gold medal for any GB men’s quad at a Championships and this has been a great junior squad to work with.”

Tanner is now looking forward to seeing the seniors compete on the Lagoa next year at the Rio 2016 Olympic and Paralympic Games.

“The organisers in Rio have also done an exceptional job on what will be the Olympic and Paralympic courses next year, including creating a wonderful atmosphere at this event,” he said. “We can look forward with confidence to two great regattas next August and September.

“Finally, thank you to all the parents, families and friends who came all the way to Brazil to cheer on our boats – their presence says a lot as well.”