A multinational rowing team of eight comprising of six men and two women and skippered by internationally acclaimed Scottish rower Leven Brown are embarking upon an historic 3,000 mile unaided row across the Atlantic Ocean. Departing Monday 19 January 2015 from Puerto de Mogan, Gran Canaria and making landfall at Port St Charles Barbados, the Trade Winds Expedition crew will not only be rowing to raise money and awareness of their chosen charities but will also be attempting to break the existing 30-day Atlantic cross barrier.

The Trade Winds Expedition will take approximately 30 days, where the eight-strong crew will be rowing 24 hours a day in two hourly shifts covering 3,000miles. The 30-day limit is currently seen as the four minute mile of ocean rowing and the crew will be attempting to break the following three Guinness World records:

Ocean rowing is considered one of the world’s toughest extreme sports with fewer people having completed an ocean row than have climbed Mount Everest. Having completed a crossing of the Indian Ocean with a top class team in August 2014 achieving two Ocean rowing records, this Atlantic Trade Winds Expedition will be the second ocean row within six months for British Skipper Leven Brown, founder and co-owner of Ocean Row Events.

Scotsman Leven Brown (42), Skipper and MD of Ocean Row Events commented:
“As you can imagine, we are all very excited about the forthcoming row across the Atlantic (ocean) and are confident we can achieve our 30-day limit. We held a speed record back in 2008 with a time of 33 days, seven hours and 30 minutes that was subsequently beaten by Matty Craughwell in a boat called Sara G who has now set the time of 32 days exactly.

“We know we have a good chance of breaking this record as we have been on pace before when our core crew team broke the oldest standing ocean row record by 11 days. This old record was originally set in 1894 when two Norwegians rowed across the North Atlantic Ocean from New York to The Scilly Isles.

“We also hold the record for the greatest amount of miles travelled on the Atlantic in 24 hours (118miles) with only four men rowing, this record still stands despite there being 14, 12, 8 and 6 man crews out there and our new boat is much faster than anything we have ever had before”.

Brown completed his first ocean row in 2005, has broken seven world records and in 2015 is now celebrating 10 years of ocean rowing by attempting to break the 30-day Atlantic row challenge.

The eight-person crew, most of whom have never rowed an ocean before, have been in training for months in preparation for this epic journey. Each crew member has their own remarkable story from South African woman Thato Mabelane, who if successful, will be the first black African woman to ever row an ocean to ex-Army officer Nikki Brown, who having been told in 2005 he would never walk again after a tragic injury is set to achieve a momentous personal triumph. 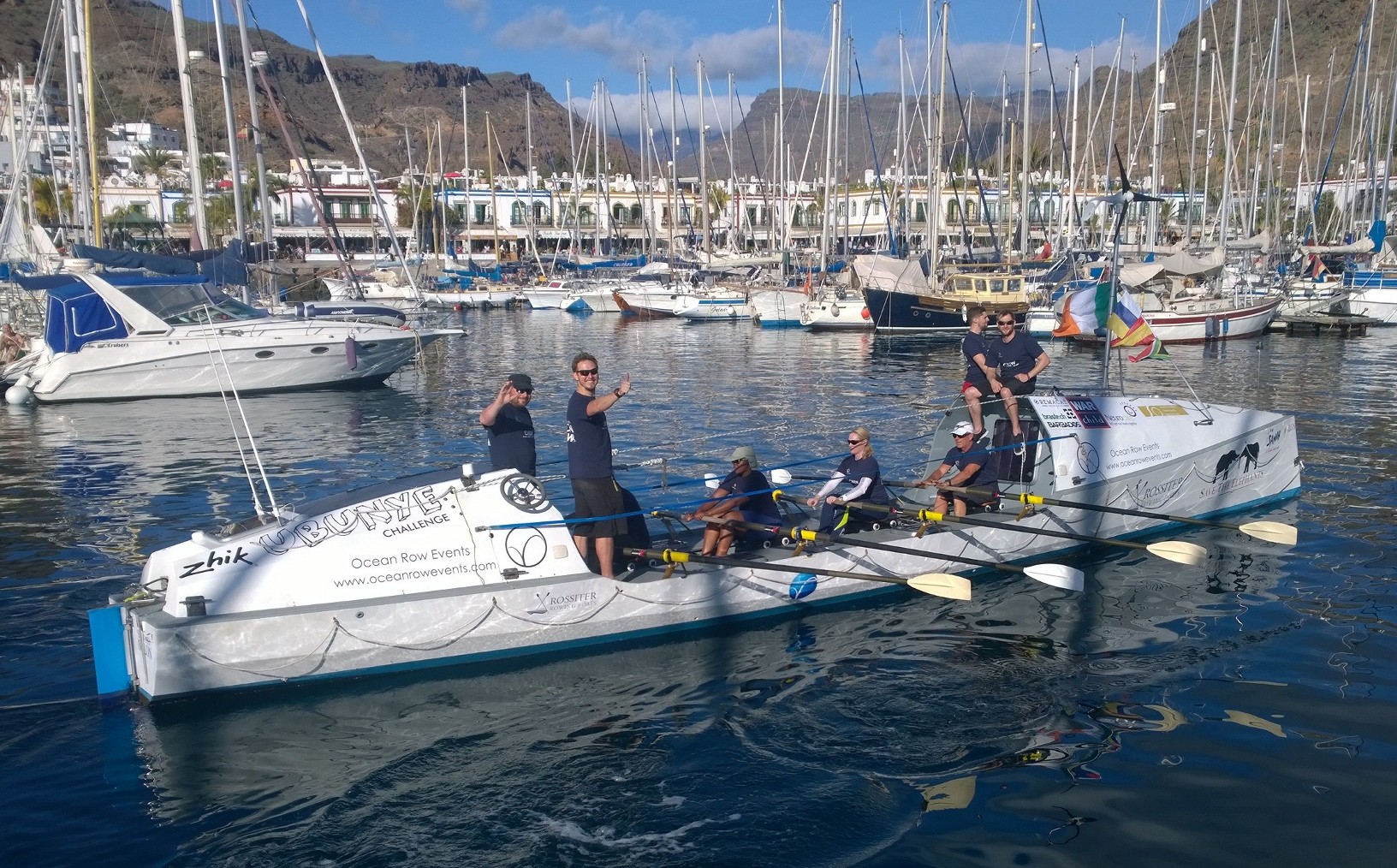 Confined within the 45ft purpose-built rowing boat, Avalon, each crew member will burn between 8,000 – 10,000 calories per day and receive a daily ration pack containing three freeze-dried meals. The crew will also be making water daily utilising a solar and wind powered water purifier and will experience temperatures of up to 40 degrees.

The crew will row in a 45ft purpose built boat called Avalon, an eight-person monohull made of carbon Kevlar with design features which aide self righting and reduce drag significantly are unique to the boat and crafted to tackle the Atlantic ocean with blistering pace.

The Trade Winds Expedition row can be followed on a live GPS tracker via: https://my.yb.tl/OceanRowEvents and through social media on: @oceanrowevents #thequestfor30days