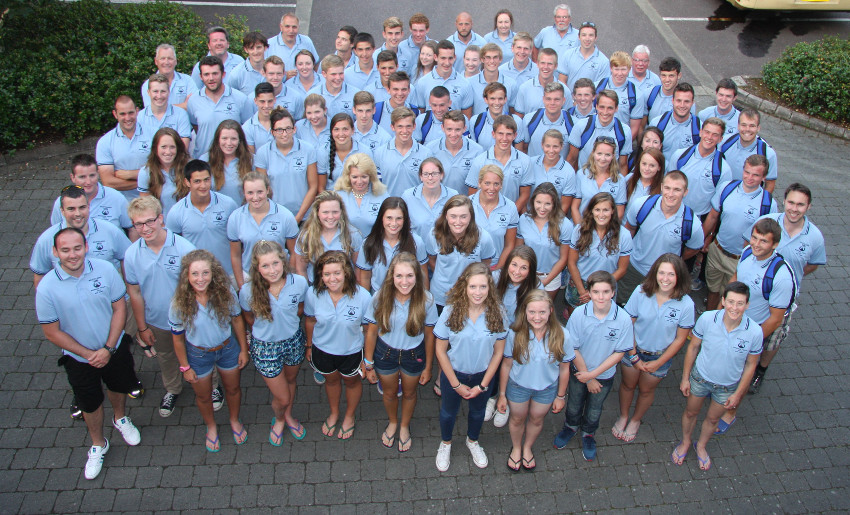 A day that started with quiet optimism soon turned into elation as Leander Club’s Harry Leask started off the Scottish success in the fourth race of the day with a clear water victory over England in the junior men’s single scull.

With ‘Flower of Scotland’ belting out and the Scottish saltire making a regular appearance on the podium at the National Rowing Centre at Farran Wood, the Scottish team built up some momentum and 3 back-to-back wins followed in the women’s and men’s coxed fours and the lightweight women’s double scull, giving Glasgow University’s Emma McDonald and Rebecca Lightfoot their second medals of the day.

There was further McDonald success in the junior women’s double scull when Emma’s younger sister Laura teamed up with Katy McDonald to win gold from England, rounding off an excellent season for the young George Watson’s College duo, who had recently won the junior 16 double sculls at the British Rowing Championships and also the GB France Junior 16 match.

Next on the podium was Scotland’s women’s double scull, represented by Georgina Grandfield and Elizabeth Crighton of Edinburgh University Boat Club. Crighton had been in the winning coxed four less than an hour earlier and she and Grandfield struck up a lovely rhythm to destroy the rest of the field and finish over 7 seconds ahead of England.

The men’s double scull joined their female counterparts on the podium however they were forced to work extremely hard for their win as they had to row through their Welsh opposition in the final 500 metres of their race. Stroked by Edinburgh University Boat Club’s James Scott and backed up by Aberdeen Boat Club’s Gary Wilson in the bow seat, the Scottish crew had lifted their rate and timed the race to perfection, much to the delight of the on looking Scottish support.

The Glasgow Academy’s Alex Rankin and Holly Wicklow added the junior women’s coxed four to their earlier coxless pair’s title. Racing in the same combination which had previously this month won gold for Great Britain at the GB France Junior 16 match, Rankin and Wicklow along with India Somerside and Rebecca Neilson, coxed by Rebecca Moore of George Watson’s College, edged a tough battle with Wales for an impressive win.

Stroked by Sam Fowler, the Scottish women’s coxless four which also featured Karen Bennett, Natalie Irvine (Strathclyde Park) and Rowan McKellar (Broxbourne RC), produced one of the performances of the day to completely leave the rest of the field for dead in the first 1,000 metres, allowing the Scots to take control of the race and paddle in to the finish line over 10 seconds clear of their nearest rivals England.

Scotland was represented in the mixed trunk and arms single sculls event by Scott Meenagh of Strathclyde Park Rowing Club and the former Paratrooper from Cumbernauld, who lost both of his legs in Afghanistan, demonstrated his fighting spirit to overcome the 22 second head start granted to his female opposition, to win by clear water in 4 minutes and 21 seconds and set a new personal best by over 20 seconds.

Going into the ‘big boat’ races following the afternoon break, Scotland had already attained enough points to secure the senior women’s overall title having won 6 of the 8 races earlier in the day. The senior men had a 2 point lead over the hosts Ireland to defend whilst the junior women had to finish in front of England in the eight to bring the team trophy back to Scotland.

The junior women’s eight was the first race up after the interval and despite a good start the Scottish crew began to show signs of fatigue following a long and hard days racing, only managing to take third place behind the winners England and second place Ireland, and in the process narrowly missing out on the team prize to England.

Heading out onto the water with fire in their bellies the Scottish men’s quad knew that if they finished ahead of Ireland that they could all but end the host’s challenge for the team prize. Edinburgh University lightweights Tom Claxton, Kieran Brown and James Scott were joined by Aberdeen Boat Club’s single sculler Gary Wilson and the Scots took a clear lead on Ireland through the middle of the race however they were determined to finish their regatta in style and fought Wales the whole way to the finish line, pipping them by just over 2 seconds.

With both senior titles in the bag, the final two races of the day became more of an exhibition with bragging rights at stake for both the men’s and women’s team. The women’s eight came down the course first and true to form had all but won the race by the half-way point, cruising through the finish line with clear water to spare and in doing so ensuring that every member of the 13-strong women’s team picked up a winners medal on the day.

The men’s eight were not to be outdone and in the final race of an excellent championships, the crew from Edinburgh University burst out of the blocks intent on leaving their mark on the day. With 5 members of the boat having taken rowing up over the last 3 years whilst at University you would not have automatically expected to have seen the maturity with which the crew rowed however their excellent preparation under the guidance of Head Coach Colin Williamson paid off and they moved away from the field as they crossed the finish line to complete an historic day for the Scotland Rowing Team.

When Senior Team Captain’s Kieran Brown and Karen Bennett lifted the trophies later that evening there were a sense of real pride throughout the whole team as it was the first time since 2002 and 2006 respectively that Scotland had won the overall senior men’s and women’s titles and the first time since 1990 that both had been won in the same year. The Scotland junior women finished in second place whilst the junior men were third.

“The Home International Regatta is a unique event where you are not only competing to win your race but also to contribute points towards the team events. This has been the best ever points haul by a Scotland Rowing Team in history and I am immensely proud of all of our athletes, coaches and support staff for their achievements both on and off the water.

“This is an extremely young and exciting team with plenty of rowers who will be involved in future teams for years to come. The junior team had a large number of junior 16 athletes who will come back stronger and quicker next year whilst in the senior team we have athletes such as Calum Irvine of Edinburgh University Boat Club who only took up the sport less than a year ago, but who have already tasted success at an international level.”

• Scottish Rowing is the governing body for rowing in Scotland and is supported by sportscotland, the national agency for sport.
• Scottish Rowing supports its clubs and coaches to produce athletes capable of representing the GB Rowing Team.
• The sportscotland institute of sport provide expert support services to our most promising rowers based in Scotland.
• Rowing is one of Scotland’s most successful Olympic sports with 2 Olympic and 1 Paralympic gold medals won at London 2012 [Katherine Grainger: women’s double scull, Heather Stanning: women’s coxless pair & David Smith: mixed LTA coxed four]
• Scottish Rowing is currently working to grow participation and improve performances across Scotland with a number of exciting initiatives targeting junior and under 23 development.