This terms Glasgow City Council Funded Glasgow Schools Indoor Rowing Competition was held at St Mungos Academy on Tuesday 5th of November.  The event which is organised by Scottish Rowing’s Glasgow Schools Rowing Project Co-ordinator Gerry Best was attended by 10 Glasgow Schools and over 190 children entered the 8 individual events which ranged from J12 to J15 and the very exciting team event. 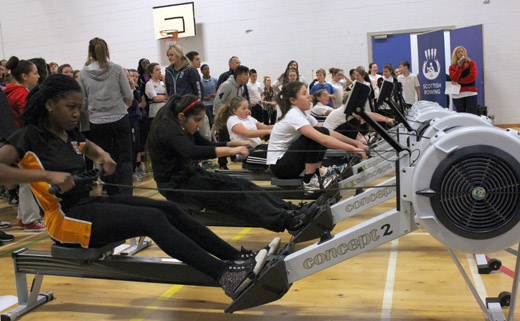 Thirteen teams raced it out in the relay event and the trophy was eventually won by Holyrood whose team of 6 youngsters completed an impressive 1670m in the six minutes allowed.  The pupils left the highly competitive event “determined to train harder and strive to improve their performances in the future”.  Huge thanks to St Mungos Academy for hosting the event and to Glasgow City Council for their continued support of this highly successful project. The next event will be held in February……..